John 3:16 (NLT)“For God loved the world so much that he gave his one and only Son, so that everyone who believes in him will not perish but have eternal life. [emphasis mine]

It’s a familiar verse. If you’ve been a Christian for a while, you’ve memorized it. If you’re new to Christianity, or maybe aren’t even a Christian, I bet you’ve heard it or seen it on a sign at some event.

Are you a parent? If you are, can you imagine sacrificing your ONE son to save anyone, let alone a group of people who do not appreciate the gift they’ve been given? I can’t. I have five sons and would not want to sacrifice any of them.

“For God loved the world so much…”

And yet God did. Ephesians 2:4-5 says, “But God is so rich in mercy, and he loved us so much, that even though we were dead because of our sins, he gave us life when he raised Christ from the dead. (It is only by God’s grace that you have been saved!)” (NLT, emphasis mine)

First John 4:9 reemphasizes this: “God showed how much he loved us by sending his one and only Son into the world so that we might have eternal life through him.” (NLT, emphasis mine)

Maybe you think you are beyond his love. You’re not. The word EVERYONE in John 3:16 means just what it says…everyone, all, the whole, every kind of.

All it takes is believing to feel it, and you will feel it, but know that He loves you whether you accept it or not. Believing means to have faith or trust in something. You believe everyday that the chair you sit in daily will hold you every time you sit down. If you can believe in a chair which can rust or break, why not believe in God, the creator of the Universe. He is trustworthy.

God does not want ANYONE to perish. The word for perish in the Greek means to fully destroy, cut off entirely, permanent destruction. Gone. Finished. Dead. Forever. No second chances.

We all have times when we doubt. It’s normal. But even in our doubts, God loves us. He wants us with Him forever–eternally. 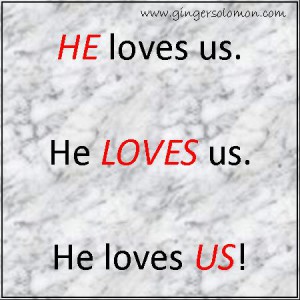 Think on His love.