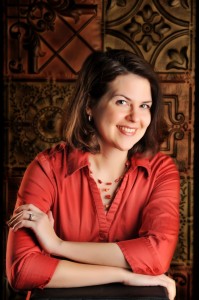 Jocelyn Green is an award-winning author of multiple fiction and nonfiction works, including Faith Deployed: Daily Encouragement for Military Wives, and The 5 Love Languages Military Edition, which she co-wrote with Dr. Gary Chapman. Her first novel in the Heroines Behind the Lines series, Wedded to War, was a Christy Award finalist, and the gold medal winner in historical fiction from the Military Writers Society of America. A native Northerner, she and her Southern-born-and-bred husband live in Cedar Falls, Iowa, with their two children. Her goal with every book is to inspire faith and courage in her readers. Visit her at www.jocelyngreen.com.

Recently, I had the privilege of speaking at the Marietta Museum of History in Marietta, Georgia, as I launched my latest novel, Yankee in Atlanta. Wish you all could have been there! But since you weren’t, here are just a few highlights from what I shared:

There is a lot more to say about Civil War Atlanta and the civilian experience there, of course. And it’s far more dramatic than this bulleted list might suggest. If you want to plumb the depths of divided families, conflicted loyalties, and hearts refined by fire, crack open Yankee in Atlanta and experience it through the eyes of Caitlin McKae and those in her life.

About Yankee in Atlanta: 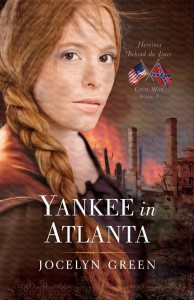 She hid from her past to find a future—and landed on enemy soil.

When soldier Caitlin McKae wakes up in Atlanta, the Georgian doctor who treats her believes Caitlin’s only secret is that she had been fighting for the South disguised as a man. In order to avoid arrest or worse, Caitlin hides her true identity and makes a new life for herself in Atlanta as a governess for the daughter of Noah Becker—on the brink of his enlistment with the Rebel army. Though starvation rules, and Sherman rages, she will not run again. In a land shattered by strife and suffering, a Union veteran and a Rebel soldier test the limits of loyalty and discover the courage to survive.

Thanks for joining us today, Jocelyn. You gave us some interesting tidbits about the Civil War that I didn’t know.

Yankee in Atlanta can be found at Amazon and other fine retailers.