A few weeks ago, I went through some of the words of James 5:16. You can find that post here. Today, I’m going to focus on a single Greek word. I won’t give all of the passages where it’s found as there are over a hundred. You can find all of those here, which is where I found the following information.

Sozo is similar to iaomai, one of the words found in the James passage. While iaomai means “to cure, heal, or free from errors and sins,” sozo means “to save, keep safe and sound, to rescue from danger or destruction; to save a suffering one (from disease), to make well, heal, restore to health; to deliver from the penalties of the Messianic judgment.” 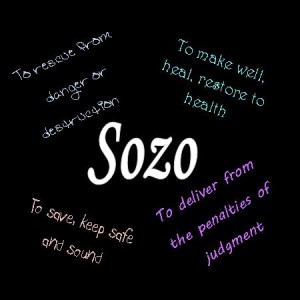 Most times sozo is translated as saved or a variation (88 times), it is also translated as cured, get well, made well, recover or restore. Just as iaomai means both healing and salvation, sozo does as well.

Let’s look at a few verses.

Matthew 9:21-22(NAS), “for she was saying to herself, ‘If I only touch His garment, I will get well.’ But Jesus turning and seeing her said, ‘Daughter, take courage; your faith has made you well.’ At once the woman was made well.”

This passage is about the healing of the woman with the issue of blood. Three times here sozo is translated as “get well” or “made well.”

Mark 6:56(NAS), “Wherever He entered villages, or cities, or countryside, they were laying the sick in the market places, and imploring Him that they might just touch the fringe of His cloak; and as many as touched it were being cured.”

Here sozo is translated as cured.

Luke also relates the story of the woman with the issue of blood, but in his story, Jesus was on his way to Jairus’s house to heal his daughter.  Someone from his house met them when they were on their way again, telling Jairus his daughter was dead. Jesus told Jairus, “Do not be afraid any longer; only believe, and she will be made well.” (Luke 8:50, NAS) Jairus must have had a smidgen of belief, for Jesus goes on to raise her from the dead, evidenced by the fact that verse 55 says, “her spirit returned.”

Acts 14:8-10 (NAS), “At Lystra a man was sitting who had no strength in his feet, lame from his mother’s womb, who had never walked.  This man was listening to Paul as he spoke, who, when he had fixed his gaze on him and had seen that he had faith to be made well,  said with a loud voice, ‘Stand upright on your feet.’ And he leaped up and began to walk.”

Maybe one more, though this time sozo is translated saved, it is a well-known verse.

Eph. 2:8 (NAS), “For by grace you have been saved through faith; and that not of yourselves, it is the gift of God;”

I like to do word studies like this because just as our word ‘love’ has many meanings, the original Greek does as well.

I pray my search for encouragement, encourages you as well.