If you’ve been here for very long, you know I love to study the Word. Reading it by chapter and verse doesn’t do it for me, but I’d run out of words to study–at least ones that incited any excitement.

A few weeks ago, a fellow writer posted on her Facebook page about verse mapping. I’d never heard of it before, so I went and looked it up. I found it on the Proverbs 31 website here.  I actually wound up watching a lot of their Bible Study Skills videos. They’re very good. I went to another site…that of my fellow writer. She posted pictures of her forays into verse mapping. It was awesome, and I knew it was something that would pull ME further into the Word.

So I started. I’ve been reading The Gospel of John, but I went back to the beginning so I could really dig in and learn about John and about Jesus.

John 1:1 looked lonely, so I did the first five verses. But before I did that, I researched the writer. 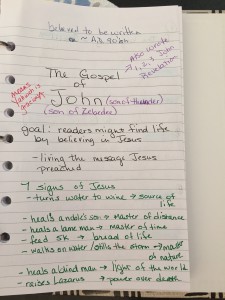 We have a study Bible, so I flipped to John’s gospel and read what those before me have studied. Here’s what I learned (and what you probably can’t read on this picture.  –>

I turned the page and began with chapter 1. It took me two days to do the first five verses, but…wow…I loved it.

I found Biblehub.com (thanks to one of the two sites mentioned above), which gives cross-references, interlinear (I like to study the original language), and a host of other study tools. All of the notes below come from their site.

My plan for Monday Musing is to bring you along as I study verses that speak to me in John. So here we go…

John 1:1-5, “In the beginning the Word already existed. The Word was with God, and the Word was God. He existed in the beginning with God. God created everything through him, and nothing was created except through him. The Word gave life to everything that was created, and his life brought light to everyone. The light shines in the darkness, and the darkness can never extinguish it.”

Verse 3: ” God created everything through him, and nothing was created except through him.”

Verse 4: “The Word gave life to everything that was created, and his life brought light to everyone.”

I know this was long, and it will probably much shorter in the future, but I pray it has blessed you as much or more than it blessed me when I worked on it this past week.

2 thoughts on “Verse Mapping – A New Study in John”