JC Morrows – bestselling author of Young Adult Dystopian and Post-Apocalyptic Fiction, drinker of coffee and avid reader – is a storyteller in the truest sense of the word. JC has been telling stories in one form or another her entire life and once her mother convinced her to write them down, she couldn’t stop. She gives God all of the glory for her talent and ability!

“And the LORD answered me, and said, Write the vision, and make it plain upon tables, that he may run that readeth it.” Habakkuk 2:2 KJV

In book 4 of my Order of the MoonStone series, we deal with a couple of controversial issues — one which initially gave me some serious difficulty. Thankfully, I had a wonderful resource at my disposal (my Bible) and I was reminded in no small part by my mother’s morning Bible reading that there are multiple times when God sends His people to deal with enemies and even more times where God delivers the enemy into the hands of His people.

Those of us who grew up being taught to “turn the other cheek” tend to think that is the only reaction God allows us, but that is not the case. God consistently raised up mighty warriors when His people were under attack.

“For the LORD your God is he that goeth with you, to fight for you against your enemies, to save you.” – Deuteronomy 20:4 KJV

“The noise of a multitude in the mountains, like as of a great people; a tumultuous noise of the kingdoms of nations gathered together: the Lord of hosts mustereth the host of the battle. They come from a far country, from the end of heaven, even the Lord, and the weapons of his indignation, to destroy the whole land. Howl ye; for the day of the Lord is at hand; it shall come as a destruction from the Almighty.” – Isaiah 13:4-6 KJV

“And they shall be as mighty men, which tread down their enemies in the mire of the streets in the battle: and they shall fight, because the LORD is with them, and the riders on horses shall be confounded.” – Zechariah 10:5 KJV

This is the situation my characters find themselves in. The Kingdom is under intense attack and the Prince has nearly been murdered on several occasions. It is no small irony that one of his would-be assassins is now his wife – and with her help, he must take down her former employers . . . or attempt to do so.

I wrote this story entirely under the influence of Divine inspiration, so you can imagine my surprise when I began writing book four and realized that my dear Prince and his new beloved must now destroy the organization that is after the throne of Auralius.

I was beyond shocked.

In fact, I was late turning in the finished manuscript because I kept trying to find some way to change the inevitable outcome.

Only when I finally capitulated and allowed God’s hand to guide the story back to where He wanted it, was I able to finish and turn in the manuscript.

And once I did, I felt an unbelieveable calm. Perhaps this is indicative of my current struggles. Perhaps it is the word that some nameless reader is seeking out. Perhaps it is simply meant to be a reminder to God’s people that He has their back in this seemingly never-ending battle we live every day in our fallen world.

More about A Tragic Consequence: 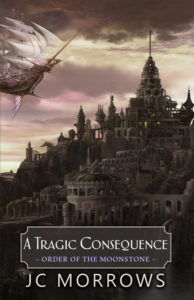 Not exactly a safe place for a former assassin and a prince with a price on his head.

In the dark streets of Auralius, Kayden and her prince struggle to find a way to set the country right again. But the Order of the MoonStone has a long reach and a strong grip.

Will the two of them be able to find a way to bring down Kayden’s former employers?

Or will Kayden’s unusual charm help them to find an ally where there was none?

Where to connect with JC: