I haven’t posted a personal update in a while. Life has been … hectic.

May brought the end of the school year and BRMCWC (Blue Ridge Mountains Christian Writing Conference), which I make an effort to attend yearly.

June was quiet, except for wedding preparations.

In July, Son #3 shared I dos with his lovely bride.

A bittersweet moment for this momma. We raise and nurture our children with hopes and many prayers that they’ll grow up to be responsible adults who give back to the world. But it’s hard to let them go, especially if you’re a homeschool momma like me. We spend most of our time WITH our children. So when they move on, a large part of us is lost in the process.

I spent many days pulling my hair out and wearing out the knees of my pants on this child, but he’s turned out better than I ever could have imagined. He has a strong faith, a great work ethic, and has chosen a worthy (and feisty) spouse.

August meant losing … I mean moving … another child into a new adventure. My youngest daughter, now eighteen, moved away to college.

But as if that weren’t enough, we had to arrange it around our vacation, which had been planned since March. The week before vacation, we took the majority of her stuff to a relative of a friend’s house to store temporarily. On the way to New Orleans, where we’d board our ship, we dropped off her car. Then we continued our trip. (More about the cruise later.) On the way home, because thankfully her new apartment wasn’t too far out of the way, we dropped her off.

After trying to get her moved in, we realized we’d transported the WRONG bed frame. We have several bunk bed sets in our attic (saving them for when the future grands come to visit). We picked the ONLY full-size one we own. I don’t know why I didn’t realize it, but I didn’t. 🙁

So we brought that bed frame home with us, and she kept the twin mattress and slept on it on the floor for a week. When we sent the other frame down with her, she got “home” and realized that the screws we’d left were too short. YES, there are different ones for different bed frames. You’d think we’d know that. Alas, we just told her to go buy new ones that were longer. She FINALLY got her bed up with the help of her roommates. 🙂 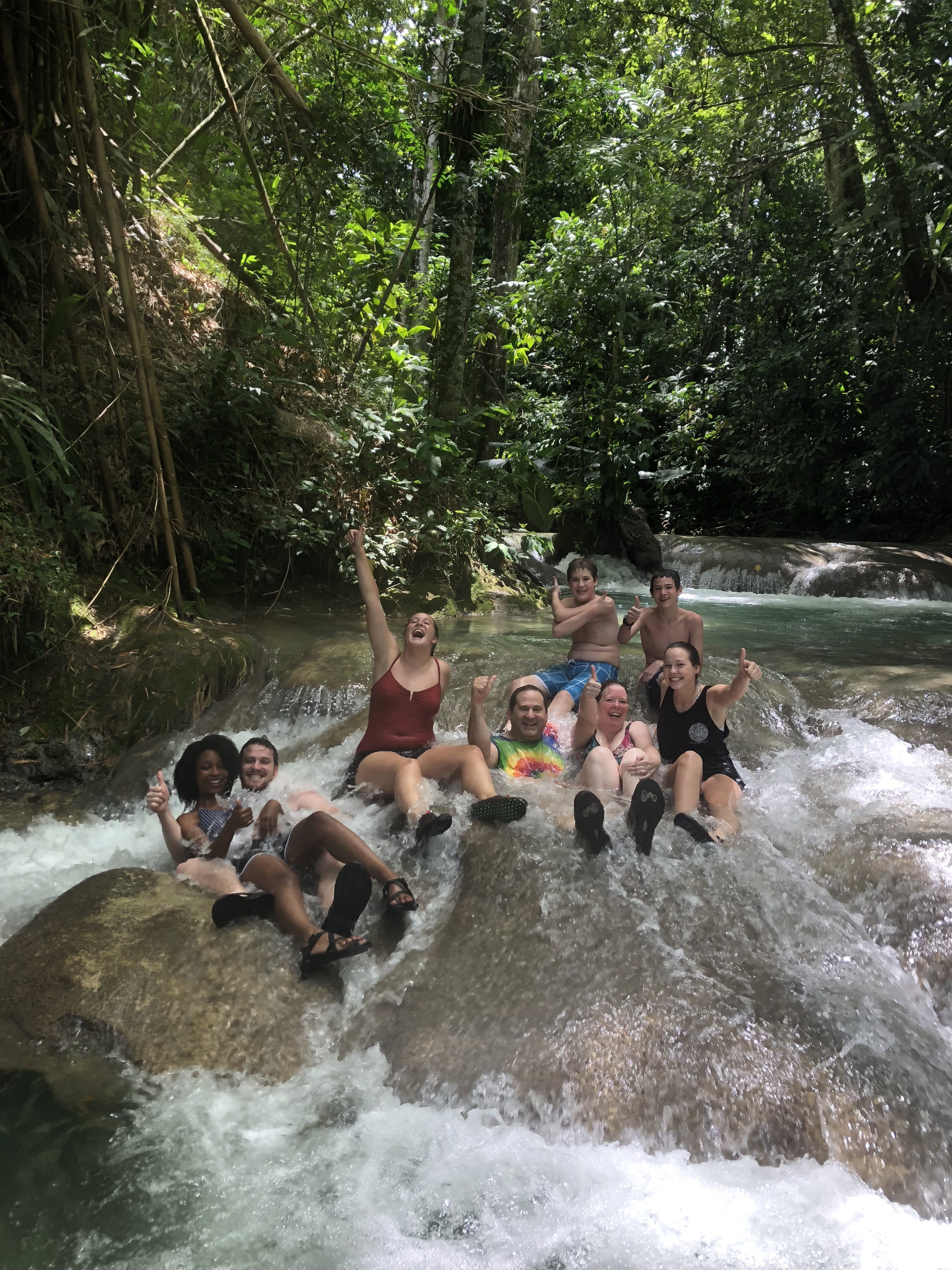 The cruise was amazing. My husband does a great job planning excursions, though they were quite tiring because we hit port three days in a row. The first port was Jamaica.

We climbed into a van–all seven of us (hubby and I, four youngest, and son #3 with his new wife–they didn’t get much time for a honeymoon, so this was our present to them)–with a Jamaican driver. Whoowee… Those roads.

Anyway, we traveled for a bit and wound up in this remote area where we were going tubing. I couldn’t find any pictures, though I know we have a few. It was AMAZING and so much fun. These young, Jamaican men pushed us along, pulled us out of danger (not really, just kept us from getting stuck), and raced ahead to do it all again. They worked hard to keep the seven of us moving, not that the river was slow by any means. It definitely WASN’T a “lazy” river.

Afterward, we climbed back into the van, post laughing at my hubby for ripping his swimsuit. Thankfully, only the first layer tore, and his backside remained hidden from view. 😀

Our next stop was another river (pictured above). We basically walked the river with all it’s mini-waterfalls. At one point, the boys and one of the girls jumped into a hole and came out elsewhere. It had a natural–albeit small–cave-like opening underwater. I didn’t do that one. Nope, not getting me into a confined space UNDERWATER. LOL The actual walk wasn’t hard. Climbing the little sections caused me a few issues, but our guide was wonderful and helped me up quite a few of them. (I hate getting older!) 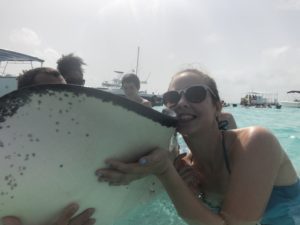 Had to go look.) In Costa Maya, we boarded another van. This one was smaller, so one of my sons sat on my lap for the short ride. Then we hopped on a charter boat which took us to see stingrays first.

This is my daughter getting a stingray KISS. –>

No, I didn’t do THAT, but I did hold one. Their skin was smooth with a few sand-like bumps on it. Anyone who wanted to could feed them as well. I didn’t do that either. LOL

After a few minutes with the stingrays, we went snorkeling at a reef. Sadly, I didn’t enjoy that much, and one of our party got sick (no, it wasn’t me though I wasn’t feeling wonderful), so we cut that part of the excursion short. 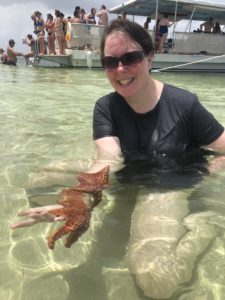 Then, lastly, we went to this little beach area where we got to see and hold STARFISH.

When you rest the starfish on your skin, they’d attach themselves to you with the tiny suckers they have on their “legs.” They sort of hugged you with their tentacles.

Here I have two on my arm and hand. I’m not holding them; they are holding me. 😀

They were amazing. I think I could have stayed there far longer. But alas, we had a ship to return to, and our guides had another tour to give later that afternoon.

The next day the ship ported in Cozumel, but most of us were too tired to get off the boat. My hubby and daughter went shopping (those extroverts HAVE to do something); the rest of us rested. I now wish I’d have at least gone shopping, and had we had a day between stops, I probably would have, but the two previous days had been long and tiring. I needed the rest.

And NOW, we’re home. My daughter is settling in to her new “norm” with her roommates and school schedule. I miss her, but I know she’s exactly where God wants her to be. And the whole purpose of my job as mom is to teach them to do exactly what she’s doing–leaving the nest and flying on her own.

Writing wise: well, not much has happened over the summer, but I’m in crunch time right now. I have TWO Christmas novellas releasing this year with two different boxed sets. I’ll tell you more about those later. I’m not sure I’ll get anything else out this year, but I hope to have several releases early in 2019.