Carole Brown joins me today with a Christmas post. 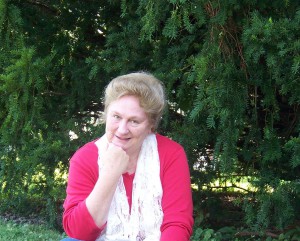 Carole Brown lives in Southeast Ohio where she and her husband enjoy their grandsons and play the game of grandparenting for all their worth! Good food, whether at home or in finer restaurants, walks in the woods, reading some good, keeper books, occasional boating and fishing and camping outings, and collaborating on their children’s books are some favorite activities.

The Love, Joy and Peace of Christmas

In With Music in Their Hearts, Tyrell and Emma Jaine both struggle to show their love toward each other. If only they would have released their fears and mistrust earlier, they could have accepted the love each offered sooner. In this passage, Tyrell is singing to Emma Jaine, and the love he feels for her is shown in both the song he chose and the passion with which he sings:

The warmth in his voice sent shivers coursing down her spine. It was winter so why did the wild thought send heat through her body? Shaking her head, she let her hands drop into her lap, careful to avoid his eyes. Her heart thumped like a sprinter running toward a goal.

But God’s love revealed itself in his gift to us: his only son, Jesus. A perfect gift and given with unconditional love, if only we can let go of our doubts and fears and accept it!

The dictionary says this about joy: “a strong feeling of pleasure, gladness and happiness.”  Just as the song goes, “Joy to the World,” there is joy in the Christmas season.

In the book, Emma Jaine and Tyrell had their fun times together, teasing and laughing together, which shows in this short excerpt :

His arms spread wide and Emma Jaine sprang toward the door. She stopped midway through and flung back at him, “And what are the consequences, Mr. Walker? I’d like to–”

Eyes narrowed in his lean face, and the warm warning and laughter in them sent her heart to her throat. Before he could speak, she wrinkled her nose at him and lifted a hand to give him a finger wave. “Night.”

With a  hurried step, she headed straight for her own room. She’d played with danger long enough for one evening.

God’s joy to the world is everlasting and abundant! There is no measuring of it and definitely no ending of it. Eternal joy for our taking. Offered freely.

Fears gone and distrust confessed and forgotten, Tyrell and Emma Jaine finally find peace in the struggle to accept each other’s love:

“I’ve never declared love to any girl but you, Emma Jaine. I didn’t want to involve you in this double life I’m living, but I can’t live without you. You understand what I’m saying?” His arm tightened around her. His lips touched hers.

“That’s what I wanted to hear. I love you Tyrell, with all my heart.” The feathery sigh slipped from between her lips. Could she love this man anymore? She laughed as a snowflake landed on his nose, “It’s snowing.”

“So it is.” His arm tightened around her and they walked on, straight past the pond, the West Street Community Church and on toward the Rayner house.

Once we accept God’s love–his son–and feel the joy he has for us, then peace will be ours. This season, if you haven’t already, realize God’s love . . . And joy . . . And peace.

More about With Music in Their Hearts: 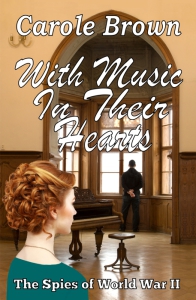 Angry at being rejected for military service, Minister Tyrell Walker accepts the call to serve as a civilian spy within his own country. Across the river from Cincinnati, Ohio, a spy working for a foreign country is stealing secret plans for newly developed ammunition to be used in the war. According to his FBI cousin, this spy favors pink stationery
giving strong indications that a woman is involved.
He’s instructed to obtain a room in the Rayner Boarding House run by the lovely, spunky red-haired Emma Jaine Rayner. Sparks of jealousy and love fly between them immediately even as they battle suspicions that one or the other is not on the up and up.
While Tyrell searches for the murdering spy who reaches even into the boarding home, Emma Jaine struggles with an annoying renter, a worried father (who could be involved in this spy thing), and two younger sisters who are very different but just as strong willed as she is.
As Tyrell works to keep his double life a secret and locate the traitor, he refuses to believe that Emma Jaine could be involved even when he sees a red-haired woman in the arms of another man.
Could the handsome and svelte banker who’s also determined to win Emma Jaine’s hand for marriage, be the dangerous man he’s looking for? Is the trouble-making renter who hassles Emma Jaine serving as a flunky? Worse, is Papa Rayner so worried about his finances and keeping his girls in the style they’re used to, that he’ll stoop to espionage?
Will their love survive the danger and personal issues that arise to hinder the path of true love?

5 thoughts on “The Love, Joy and Peace of Christmas by Carole Brown”