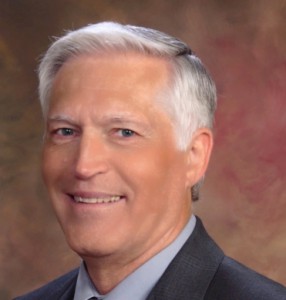 H. L. Wegley has been a USAF Intelligence Analyst and a Weather Officer, performed weather research, and published in the scientific literature. After earning an advanced Computer-Science degree, he developed computing systems for 20+ years, then he and his wife of 48 years retired in the Seattle area where he writes, enjoys grandchildren, and is involved in small-group ministry. He has a contracted 4-book, Christian-thriller-series with Harbourlight Books, Pelican Book Group. He’s currently finishing his 8th novel, a political thriller.

Katie Brandt, the 21-year-old heroine in Triple Threat, was taught well by her adoptive father. In the spirit of 1 Peter 3:15, she has answered every question agnostic Joshua West, threw at her, answering the problem of evil, defending the resurrection, and much more. As we will see in the excerpt below, the answers may have opened Josh’s mind a bit, but he still isn’t convinced.

While our answers to people’s questions may remove some barriers to faith, they don’t convince the human heart. That’s God’s domain. How does He do that? To illustrate one way that I’ve observed God working, let’s look at part of a scene in Triple Threat from Josh’s POV.  Kate has just finished dealing with the last of his voiced intellectual questions. Notice where his thoughts go next:

Kate’s sincerity, her logic, and her intensity pulled hard on his heart. But there were other questions that needed to be answered. What about the existence of God? People could have simply made him up because they needed something to help them survive. But would relying on something that didn’t even exist actually help you survive? And if God really was Who Kate described, He would know what people needed, right? Was that why Josh was drawn to Kate, to her story, and its explanation?

You can’t have it both ways, dude.

But he needed to be certain before committing to something so—the word, certain, arrested his thoughts. A person can’t be absolutely certain about anything, not certainty in the sense of a mathematical proof. He wasn’t certain about Kate. He saw her, observed her, wanted to be with her. Somehow, he just knew. For reasons already set in his heart, the way he was wired, Josh knew Kate was a person he wanted in his life. She was the proof.

Would it be the same way with God? Josh couldn’t prove God absolutely. An infinite Being could always remain beyond his finite grasp, unless He—

“He reaches out to us, Josh.” Kate’s voice came softly. She took his hand.

He gasped at her words, an answer to his unspoken question.

Kate pulled his hand to her heart and held it there. “He reaches out because He loves us and wants us to be with Him forever.”

Where had Kate’s words really come from? What was going on here? Coincidences? Was this just Kate’s influence on him? Or was God reaching out to Josh through Kate? …

… The whole conversation had been eerie, confining. Like a chess match when there were no more moves left.

The whopping of a big chopper’s rotor grew loud. Peterson was here.

Josh had been in checkmate, but somebody kicked the chessboard and the pieces were scattered in disarray.

Terrible timing, or God’s timing? You’ll have to read the book to find out

Though God is responsible for drawing people to Himself, He often uses the lives of His adopted children to attract people like Josh. Knowing this, we should always be aware what our lives are speaking to those around us. A Jesus-follower’s life, lived with integrity before God and others, is powerful. As Ravi Zacharias often says, our lives are the greatest apologetic for our faith. 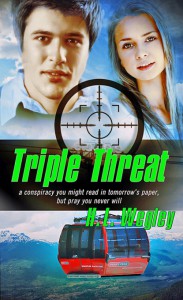 Brilliant, beautiful, 21-year-old Katie Brandt, PhD candidate and woman of faith, detects a deadly conspiracy. Suspecting it’s only the tip of an iceberg, she dives in, pulling fellow grad student, Joshua West, with her into a high-risk investigation of a cyber-terrorist plot. Damaged by the foster-care system, Katie takes huge risks to win acceptance and love. But when she risks Josh’s life, an agnostic, who isn’t prepared to die, she fears her mistake might have eternal consequences for Josh, a mistake that could break Katie’s heart, a heart rapidly falling for Josh.

Will Katie and Josh survive the investigation? If they do, can they ever span the chasm of divergent worldviews that separates them? How can they awaken a dozing nation to a three-pronged danger that threatens its very existence?

Triple Threat, an adventure that spans the Pacific Northwest from the shores of the Olympic Peninsula to the mountains of Whistler, BC, a conspiracy you might read in tomorrow’s paper, but pray you never will.

And here are the links you will need to find out more about H.L. or purchase his book.
Web site: HLWegley.com
Facebook:  https://www.facebook.com/HLWegley
Twitter: https://twitter.com/hlwegley
Amazon Page: http://www.amazon.com/H.-L.-Wegley/e/B00B1XMR56
Goodreads:  https://www.goodreads.com/book/show/23437490-triple-threat

Thanks for joining us today, H.L.