↓
Home→Uncategorized→Review: “Jewels for the Kingdom” by Delia Latham 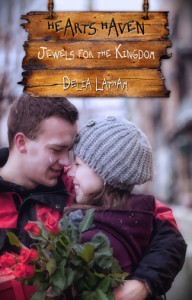 Jewels for the Kingdom by Delia Latham is book one of four novellas. I have read several of Delia’s other books, specifically The Solomon’s Gate Series, and loved them. I was excited when she contacted me to review her latest release.

In writing Jewels for the Kingdom, Delia lives up to her reputation of writing wonderful, yet real, God-inspired stories. I love, love, love how she incorporates angels in her novels. We didn’t “see” them this time, but they were there and they were felt.

It’s so amazing to me how she described the hug that Pia Peretti received. Quite a few years ago I was going through a rough patch and needed a touch from God. I NEEDED to know He was still who He said He was. As I rested on my knees in my room, crying out to Him, I physically felt arms wrapping around me. It was so very real and this one scene in Jewels for the Kingdom brought that moment back to my mind. A simple reminder that God is real and alive and loves us SO very much.

Thank you, Delia, for reminding me.

Pia Peretti’s past could destroy her future. Thanks to her pre-Christian lifestyle, she can’t marry a believer, and she won’t marry a non-believer. Minister David Myers wants to help Pia release her guilt and trust that God has forgiven her…but the young minister is working through his own trial of faith.

After a failed counseling session with a wounded soul, David’s confidence is shaken. He accepts a new pastorate, and moves to Angel Falls to find a haven for his wounded heart.

Is it possible these two hurting hearts are meant to mend each other’s brokenness with some divine intervention?

Now, people, go out and order this book. It is available for Kindle at Amazon, and for the Nook at Barnes and Noble.

The other three novellas in the series (and their release dates) are:

Operation Breathless by Marianne Evans (Nov. 9)
Leap of Faith by Tanya Stowe (Dec. 12)
Dance with Me by Mary Manners (Jan. 18)