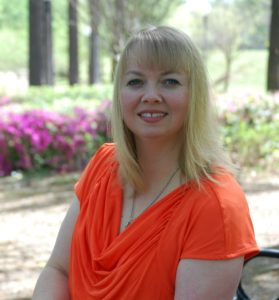 Tanya Eavenson is an international bestselling and award-winning inspirational romance author. She enjoys spending time with her husband and their three children. Her favorite pastime is grabbing a cup of coffee, eating chocolate, and reading a good book. You can find her at any of the following places:

Hi Ginger! Thank you for having me on your blog!

My pleasure. I love helping authors tell readers about their new books. Let’s get right to the questions, shall we?

Wow. I thought I had a lot. I can’t wait to read them all. Tell us about The Rescue. 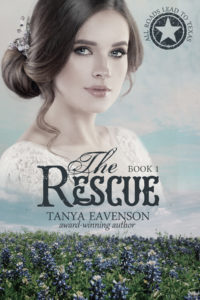 Sure! Here’s the blurb.

Sometimes the path to freedom is found in an unexpected future.

Upon the death of her mother, Rosalind Standford’s life shatters, the pieces scattering to the wind when she is forced into a betrothal to a cunning banker. But when a telegram arrives announcing the man who captured her heart is on a train to Boston, Rosalind must hide her true feelings before the thin cord of her existence unravels the deadly secrets she keeps.

Cowboy Trent Easton returns to his roots in Boston society to find his childhood friend, the love of his heart. Instead he finds a broken woman engaged to a man close to her father’s age. Though she once rejected him, when Trent learns she’s in danger, he determines to do whatever it takes to keep her safe—even taking her to the altar in the black of night. But will his name and the remote wilds of his Texas ranch be enough to protect her? Or will freedom cost them their lives?

Sounds interesting. What did you edit out of this book?

What didn’t I edit out of this book? LOL! From the first chapter to the epilogue, The Rescue has been through at least 4 drafts. There were a few train scenes that have been edited even more.

It was a fun scene to write and I loved meeting Joshua Pusey for myself :), but the historical timing of them meeting was off. And because this meeting most likely wouldn’t have taken place, I removed the matchbook from the entire manuscript and rewrote the ending.

I can relate. I have a book or two that has been through the ringer. Can you give us the first page?

Rosalind Standford’s heart thudded against her ribcage as she lifted her pale green ball gown and stepped into the foyer. Where is he? She stood on tiptoe and scanned the dinner guests, trying to catch a glimpse of Trenton Easton. Disappointment and the worry that had plagued her for the last few days clutched her. Was the gossip true?

Surely Trenton would have told her. Or her own mother, if she knew. Mother was the only person who encouraged Rosalind’s feelings for her childhood best friend, feelings that had recently begun blooming toward something more.

Rosalind’s stomach quivered at the thought. She ran her fingertips along silver threads and embroidered sequins at her waist. She’d picked this satin gown for Trenton, knowing it would accent her gray eyes, a trait he only last week said gave her a dove-like beauty.

Again she swept her gaze over the room, past her mother, her father—her gaze, unfortunately, snagging on that of Mr. Glover Richards, a man almost her father’s age. He walked toward her, the click of his heels on the wooden floor lifting above the hum of scattered conversations and the hammering of her eardrums. She forced a smile and nodded, then turned to step away. His stiff, damp fingers slid around her upper arm, halting her movement.

A chill ran up her spine. “Mr. Richards.” She pulled back.

His dark eyes narrowed, assessing. An amused smile twisted his lips. He bowed. “How are you this evening, Miss Standford?”

She trembled as her name slid past his thin lips with a hissing sound. It was silly, but she couldn’t help herself. The man gave her the cold shivers. She didn’t want to talk to him, let alone suffer his touch, though lately he’d spent so much time with their family he’d become hard to avoid. It was as if he and her father had become dearest friends. Manners demanded she give a polite response, but she couldn’t bring herself to like the man. “Doing well, thank you. And you?”

“I’m grateful for your father’s invitation to Mr. Easton’s home.”

“Being the bank’s vice president has its advantages, does it not?” She folded her gloved hands and squeezed them together, wondering if Mother felt the same unease at Mr. Richards’s constant presence.

“Indeed it does. It’s my hope this new partnership between your father and me will secure more”—the corners of his mouth rose as if he enjoyed a private joke—“pleasant opportunities to come.”

“I see,” she answered, although she didn’t understand his meaning. Father never spoke of business around her or her mother, but whatever the dealings, Mr. Richards seemed happy. “I hope you and my father have a great partnership.”

Trenton descended the stairs, so handsome in his formal wear he took her breath away. He strolled past her, his jaw tense and his blond hair nearly touching his collar. Without looking to the right or left, he headed toward the dining room.

It’s true. Trenton and his family were leaving Boston. The dinner was not a celebration but a final farewell. Tears stung her eyes. How could Trenton have kept this to himself? “If you will excuse me, Mr. Richards.”

“Allow me?” He crooked his arm.

“Thank you, but no. My father is waiting.” She hurried away before Mr. Richards could insist. Another minute with Mr. Richards might cause her to miss speaking to Trenton altogether.

Thanks for joining us today and telling us about The Rescue.

Readers, here’s how you can get your own copy of Tanya’s latest release: Amazon