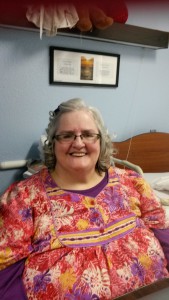 Darlene Franklin’s greatest claim to fame is that she writes full-time from a nursing home. She lives in Oklahoma, near her son and his family, and continues her interests in playing the piano and singing, books, good fellowship, and reality TV in addition to writing. She has written over thirty books and has written more than 250 devotionals. Her historical fiction ranges from the Revolutionary War to World War II, from Texas to Vermont. You can find Darlene online at https://www.facebook.com/Poet.Darlene.Franklin and http://www.amazon.com/Darlene-Franklin/e/B001K8993A/.

The high priests picked up the silver pieces, but then didn’t know what to do with them. “It wouldn’t be right to give this—a payment for murder!—as an offering in the Temple.”

Judas made a deal with the devil—i.e., the high priests—and accepted thirty pieces of silver for betraying Jesus.

His motivation for betraying his teacher remains unclear. The kindest reasoning suggests he hoped the arrest would force Jesus’ hand. The man Judas believed to be the long-awaited Messiah would stop pussyfooting around and establish His kingdom.

Instead, Jesus accepted the death sentence without calling on heaven for deliverance. As He hung on the cross dying, Judas couldn’t accept the price of his betrayal.

Judas was the greatest villain of the crucifixion drama. The religious leaders had never pretended to like Jesus. Judas had lived close to Jesus, the only perfect man in human history, for almost three years. Jesus called him friend. And that friend betrayed Him.

Judas makes a great villain, and as with a mystery, is punished. In spite of his repentance and return of the money, he committed suicide.

After Judas’ death, the high priests remind readers why we hate them so. The murder of an innocent man didn’t trouble these hypocrites in the least. Murdering an innocent man was all in a day’s business. If Jesus wasn’t the Son of God as He claimed, He was a blasphemer. He posed a threat not only to their power base, but also to their faith and the nation of Israel.

They could sanction black ops to destroy a threat to national security.

But giving the money Judas returned to the temple treasury was scandalous, impossible. They found another use for the money, invested in good works by providing a cemetery for the poor.

We’re not likely to face a choice between a man’s life and a financial windfall. But we may be in situations where neither choice is good. Gilbert Williams, the hero in My Candy Valentine, has to make one of those choices. If he fulfills his duty to his employer, he betrays the woman he has come to love.

Like Gilbert and Catrina, we can seek God’s wisdom in resolving the difficulty. Only His wisdom can draw the line between two impossible choices.

–devotion adapted from A Reader’s Journey through Matthew 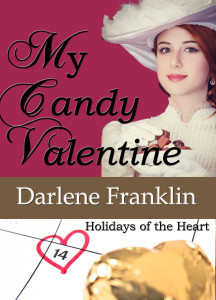 My Candy Valentine: Gilbert Williams sweeps Catrina Jensen off her feet when he arrives in Loveland, Oklahoma, shortly after New Year’s Day 1916. When the reason for his interest in her delicious candies is revealed, her affection turns to fear. Is her hero a traitor in disguise? 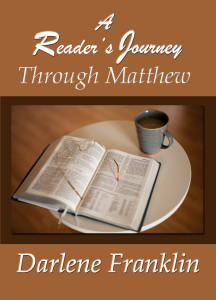 A Reader’s Journey through Matthew is written by and for avid readers and writers of literature. This seven-week devotional is perfect for a Lenten study or any time of year.

Thanks for joining me, Darlene.

Readers, have you been in a situation where you had to choose between bad and worse? If you would like to share, we’d like to know how you resolved the situation(details are optional).