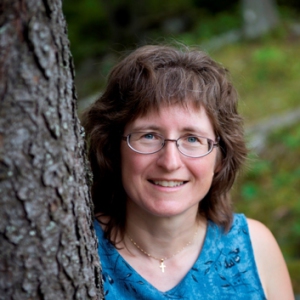 Janet Sketchley is the author of Heaven’s Prey and Secrets and Lies, two novels of suspense and redemption. She also blogs about faith and books. Janet loves adventure stories, worship music, tea and Formula 1 racing. Like Carol in Secrets and Lies, she loves music and tea. Unlike Carol, Janet isn’t related to a dangerous offender, has a happy home life, and has never been threatened by a drug lord. May those tidbits continue to hold true! You can find Janet online at janetsketchley.ca. Fans of Christian suspense are invited to join Janet’s writing journey through her monthly newsletter: bit.ly/JanetSketchleyNews.

A New Path in the Grass

If we belong to Jesus, we’re free from the power of sin and death, but there may still be “chains” in our lives, binding us in ways that keep us from growing into all God intends us to be.

Attitudes, fears, memories… they weigh us down. Discourage us.

Here’s a verse that can give us hope:

For I know that as you pray for me and the Spirit of Jesus Christ helps me, this will lead to my deliverance. Philippians 1:19, NLT

We don’t have to face this on our own. We can ask at least one trusted friend to pray, and we can remind ourselves that the Holy Spirit is at work in us. No matter what we feel.

In my novel, Secrets and Lies, the main character, Carol, has fear issues. It’s a huge struggle to risk trusting God, but once she does, the nightmares continue. In the middle of the night, she calls her friend Joey, pleading, “Why doesn’t God take them away?”

Let’s eavesdrop on a bit of their conversation:

Joey’s sigh chased along the phone line. “I wish I had an easy answer. Faith isn’t just about God getting us out of things. It’s about knowing His presence is with us in the middle of it. Even if your worst nightmare comes true, He’ll be with you to bring you out the other side.”

Goosebumps washed Carol’s arms. “I don’t want to think about them coming true!”

“They won’t, they won’t. What I mean is no matter what, God is there. Nothing can scare Him away.”

[Joey prays with Carol, and when she’s calmer, he adds this next bit of advice:]

“Here’s the tricky part. Since fear is a behaviour pattern for you, your mind will go back to it. Like a path worn in the grass. It takes time for the grass to re­grow while you wear a new path.”

A heaviness settled in her stomach. “So I’ll have more nightmares?”

“Whenever you catch the fear response starting, or if you have another nightmare, remember you don’t have to surrender. Say it out loud. Things like, ‘Jesus is my shepherd. I don’t have to be afraid.’ Believe it’s true even if you don’t feel it, and change will come. It worked for me.”

I like that path­-worn-­in­-the-­grass idea. It takes years to develop some of the habits and behaviour patterns that plague us, and while God could miraculously remove them, we develop spiritual muscles and discipline in the daily retraining of our minds and spirits to rely on Him.

I wonder… if He made it too easy for us, would we be like the butterfly that a well­-meaning child helps break free of its cocoon? The butterfly that dies because its wings haven’t been strengthened by the struggle? 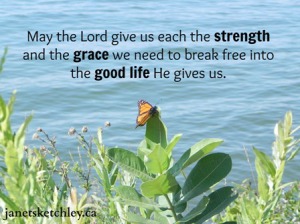 May the Lord give us each the strength and the grace we need to break free into the good life He gives us. And may we share our stories of the difference He makes in the struggle.

Is there a special verse, song, or prayer that helps you in times like these?

More about Secrets and Lies: 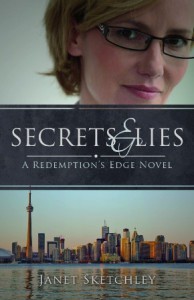 A single mother must protect her teenage son-from organized crime and from himself.

Carol Daniels thinks she out-ran her enemies, until a detective arrives at her door with a warning from her convict brother. Minor incidents take on a sinister meaning. An anonymous phone call warns her not to hide again.

Now she must cooperate with a drug lord while the police work to trap him. Carol has always handled crisis alone, but this one might break her. Late-night deejay Joey Hill offers friendship and moral support. Can she trust him? One thing’s certain. She can’t risk prayer.”

Thank you, Janet, for joining us today.

Let’s go back to Janet’s question: Is there a special verse, song, or prayer that helps you in times like these?

I personally like Isaiah 43: 18-19, “But forget all that—it is nothing compared to what I am going to do. For I am about to do something new. See, I have already begun! Do you not see it?
I will make a pathway through the wilderness. I will create rivers in the dry wasteland. “

PS. In case you haven’t found it yet, the comment button is at the top just below the title. 🙂