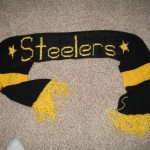 YARN
“What? Yarn?” you say. Yep, yarn.
I’ve made a few things in my time. This is probably the one I’m most proud of – up to this point.
My husband is a long-standing Pittsburgh Steelers fan and I made this scarf for him several years ago. 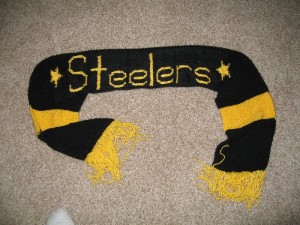 Right now I am making a scarf for my nine year old. He wanted an University of Alabama (Roll Tide) scarf for Christmas. (That sounds like a seriously wrong sentence, but it is grammatically correct. I think. Ugghhh!!!)
I asked him exactly what he wanted and then I went online and looked at scarves, which are few and far between, that had the Alabama name and colors. White was not an option – he is nine afterall. So we chose gray and Alabama Red. He wanted a red background with gray words – Roll Tide.
But I couldn’t settle for that. NO WAY! So I did a little more research and consulted another Alabama fan. Did you know that you can knit two sides at the same time? It’s called double knitting. You can view a video on youtube if your interested in finding out more.
My colors are red on one side and gray on the other. But that wasn’t enough either. I KNEW I could do the writing (see above Steelers scarf), so I have worked it out on graph paper. And reworked it out on graph paper. And worked it a third and fourth time. I had to do the same for the above scarf too. Trial and error are the best teachers.  🙂
So here’s how it’s going to look:  Gray side says ROLL TIME (in red); Red side says ALABAMA (in gray). I’m only partially done so no pictures yet. I did have to undo twice. The first time I realized my “R” was backwards and possibly upside down.  LOL Thus the need to go back and rework my design. The second time I purled when I was supposed to knit and knitted when I should have purled. Sigh, it does happen.
I am on a roll now, and I have another (quieter) request for one just like it from my fourteen year old. I told him I didn’t know if I’d have time – but I will make time. SHHHHH!!! Don’t tell him. I want it to be a surprise.
Have you ever made anything with yarn? Maybe just have a favorite something made with yarn (and with love)? Tell me about it.
As always – under HIS wings,
Ginger﻿