Heather Gray is the author of the Ladies of Larkspur inspirational western romance series, including Mail Order Man, Just Dessert, and soon-to-be-released Redemption.  Other titles include Ten Million Reasons, His Saving Grace, and Nowhere for Christmas.  Aside from a long-standing love affair with coffee, Heather’s greatest joys are her relationship with her Savior and family.  She decided years ago that laughter is better than yelling.  This theme is prevalent in her writing where, through the highs and lows, her characters find a way to love God, embrace each day, and laugh out loud.
Worst Road Trip Ever
My newest release, Nowhere for Christmas, is about a road trip.  You know the one.  It’s the worst road trip ever – the one whereeverything goes wrong.
Sadly, I can say, road trip disasters follow me.  If they don’t happen to me personally, I  hear about them from my friends.
Here’s a small sample:
Trust me, I could tell more stories. It almost sounds like the makings of a horror movie…or a fantastic comedy. Since I prefer laughter over terror, we’ll go with comedy!
I’m the first to admit I don’t always manage to laugh at situations while I’m right in the middle of them, but as I’ve gotten older, I’ve learned to trust that God has a plan. Nothing – not even a flat tire with a flat doughnut and broken jack – is too big for Him to handle. Somehow, putting my trust in Him to handle the challenges that come along has freed me up to enjoy the road trip of life a whole lot more.
So tell me, what are some of the most bizarre things that have happened to you and your vehicle? Make them good though – I want to laugh!  🙂


Back Cover:
Anything can happen on the road to Nowhere… 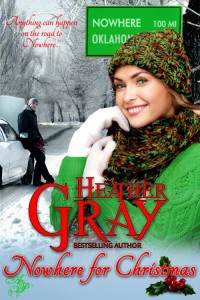 A journalist and single mother, Avery is used to being in control, though she tries to remind herself to let God take lead in her life. Eli, her teenage son, is happy as long as he has his music, plenty of food, and the occasional adult on which to practice his rapier wit.  Gavin, a virtual stranger, is a photojournalist who mysteriously disappeared from the scene a few years ago.
The trio ends up together for a Christmas road trip to the small town of Nowhere.  An eight hour drive in a rental car turns into two days of misadventure and calamity as bad luck stalks them.  They get a flat tire, the bumper falls off, the car overheats – and that’s only the beginning! Along the way they meet some interesting people – from a bait shop owner who moonlights as a mechanic to a chatty preacher’s wife and a highway patrolman whose wife and mother can’t agree on the best way to remove a skunk’s stink.
Hungry, cold, and tired, the three finally arrive in Nowhere only to discover the town is nothing like they expected. Reaching their destination, it turns out, doesn’t necessarily mean the journey has ended.
Excerpt:

“I’m going to have to go get the other one out of the attic,” she said with a sigh, hoping her son would volunteer to climb up in there and retrieve it for her.

Instead, he nodded and asked, “You want me to pull the ladder down for you?” She grinned to herself as she nodded. They had a regular battle about the attic. Neither of them liked going up there. Since he’d gone up to retrieve all the Christmas decorations earlier in the month, she’d let him have the victory this time.

After Avery scaled the creaky ladder up into the attic, she scanned the web-dusted contents, quickly locating the suitcase she needed. It was older and more faded than the green one, and it had a rust-and-mustard-colored seventies floral pattern on it. At least no one will try to steal it.

As she dragged the suitcase with its one broken wheel across the attic floor, a cloud of who-knew-what gently puffed up into the air around her. Then she got a mouthful of it and started coughing, which led to more grime and dust billowing into the air. That, of course, led to more coughing.

Avery lost her balance and started to fall out of the attic opening, but the suitcase blocked her way enough to pause her descent, giving her time to reach out and grab the back of an old chair that had been in the attic longer than they’d lived in the house. The suitcase wasn’t so lucky. It fell zipper-over-wheel down the attic ladder and landed with a loud thud on the carpeted floor below.

By the time Avery pulled herself back to her feet and made her way down the ladder, she expected to find Eli standing there wondering where his dinner was. Alas, her teen was blissfully unaware of her near-death-by-attic experience. He was in his room listening to his MP3 player. It’s for the best. I wouldn’t want him to pull a muscle laughing at me.

Nowhere for Christmas can be purchased at these retailers:

6 thoughts on “Worst Road Trip Ever by Heather Gray”