Johnnie Alexander writes inspiring stories that linger in the heart. Where Treasure Hides, her debut novel, won the ACFW Genesis Contest (2011) and Golden Leaf Award (2014). The first of her three contemporary romances, Where She Belongs (Misty Willow Series), releases from Revell in January 2016.

A graduate of Rollins College (Orlando) with a Master of Liberal Studies degree, Johnnie treasures family memories, classic movies, road trips, and stacks of books. She lives in the Memphis area where her morning chores include feeding dogs, cats, chickens, and a small herd of alpacas.

Protecting Art from the Nazis

The Woman in Gold, starring Helen Mirren and Ryan Reynolds, is about an elderly woman’s quest to reclaim her aunt’s stolen portrait. The movie touched me so deeply I watched it a second time while also reading The Lady in Gold: The Extraordinary Tale of Gustav Klimt’s Masterpiece, Portrait of Adele Bloch-Bauer.

If the movie lists the book in the closing credits, I missed it. Though the book focuses on the painting known as the “Mona Lisa of Austria,” it also delves into Klimt’s life and broader issues such as Viennese culture and anti-Semitism.

The gold-leafed portrait is of Adele Bloch-Bauer, a member of the Jewish elite living in Vienna before and during Germany’s takeover of Austria. During the war, Nazi officials removed the painting and other treasures from the Bloch-Bauer home.

The portrait was stripped of its title—after all, a Jewish woman couldn’t be the subject of such a famed painting—and eventually displayed in Austria’s state museum, the Belvedere Gallery.

Stories like this one have fascinated me since I watched The Rape of Europa several years ago. Based on Lynn H. Nicholas’s well-researched book, The Rape of Europa: The Fate of Europe’s Treasures in the Third Reich and the Second World War, the documentary tells of Hitler’s manic quest to plunder Europe for his Fuhrermuseum, a huge art complex he planned to build in his hometown of Linz, Austria.

Hitler and his minions confiscated cultural collections from museums, private individuals, and cathedrals. Works labeled degenerate were either destroyed or sold. Much of this thievery was conducted under a strange veil of legality through forged paperwork or as payment for trumped-up taxes.

Fearful of theft and destruction, many art curators and museum directors hid their treasures before the outbreak of war. Among other places, priceless art was hidden in abandoned air raid shelters, caves, and salt mines. Ironically, Hitler knew about a few of this caches—he planned to wait out the war then plunder the loot.

The heroic tale of those charged with preserving and recovering cultural treasures is seen in the movie, The Monuments Men, starring George Clooney, Matt Damon, and Bill Murray. The film is based on Ms. Nicholas’s book and Robert M. Edsel’s book, The Monuments Men: Allied Heroes, Nazi Thieves and the Greatest Treasure Hunt in History.

All these years later, survivors and their descendants are still fighting to reclaim their rightful possessions while many paintings, such as Raphael’s Portrait of a Young Man, and other cultural treasures remain missing.

It’s a mystery why a specific event or incident grabs on to our imaginations. But after watching the documentary, this massive Nazi plunder grabbed on to mine. I had to write a novel highlighting this aspect of World War II history.

I delved into Ms. Nicholas’s and Mr. Edsel’s books and a bunch of others, too, as I wrote Where Treasure Hides.

Tyndale published the novel as an e-book in 2013 and will release the print edition in August. The Dutch edition came out this past April.

More about Where Treasure Hides: 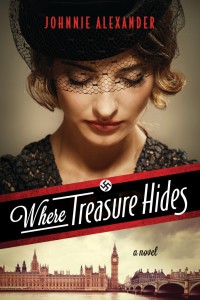 Artist Alison Schuyler spends her time working in her family’s renowned art gallery, determined to avoid the curse that has followed the Schuyler clan from the Netherlands to America and back again. She’s certain that true love will only lead to tragedy—that is, until a chance meeting at Waterloo station brings Ian Devlin into her life.

Drawn to the bold and compassionate British Army captain, Alison begins to question her fear of love as World War II breaks out, separating the two and drawing each into their own battles. While Ian fights for freedom on the battlefield, Alison works with the Dutch Underground to find a safe haven for Jewish children and priceless pieces of art alike. But safety is a luxury war does not allow.

As time, war, and human will struggle to keep them apart, will Alison and Ian have the faith to fight for their love, or is it their fate to be separated forever?

Thanks for joining us Johnnie.

1 thought on “Where Treasure Hides: Protecting Art from the Nazis By Johnnie Alexander”