An award-winning author, June Foster is a retired teacher with a BA in education and MA in counseling. June has written four novels for Desert Breeze Publishing. The Bellewood Series, Give Us This Day, As We Forgive, and Deliver Us, and Hometown Fourth of July.  Ryan’s Father is available from WhiteFire Publishing. Red and the Wolf, a modern day retelling of Little Red Riding Hood and Books One and Two in the Almond Tree Series, For All Eternity and Echoes From the Past, are available from Amazon.com. June enjoys writing stories about characters who overcome the circumstances in their lives by the power of God and His Word.

What Christina Taught Me

Years ago in my old church in El Paso, Texas, I became acquainted with a godly and faithful family who attended most every Sunday. The husband could always be found passing out bulletins and offering a smile to Sunday morning church goers as they strolled in. Most Sundays his wife attended as well, except when her youngest daughter was ill, which was more frequent than I wanted to see.

The daughter who was about sixteen at the time was severely mentally handicapped with the mind of a baby. She had to be pushed around in her reclining wheel chair as she didn’t have the ability to sit up, much less speak or use her limbs.

Every Sunday Christina attended church, she sat quietly in the aisle by her father and mother, only at times uttering soft moans or gurgles. After church I would walk up to her and smile saying “Hello, Christina.” The sideways smile that sometimes appeared on her face had to be for me.

One Sunday during the worship, I caught a glance of Christina and felt the Holy Spirit saying that people with severe mental handicaps like this girl could expect to be in God’s presence at the moment of their death. So in a sense, they were better off, without the chance of spending eternity separated from the Lord. I closed my eyes and thanked God. Then I saw in my mind’s eye, the sixteen year old Christina jumping and running around in a flower-laden garden, joyfully smiling and singing. Thus our assurance that those who are so handicapped that they might not be able to choose Christ on this earth, will automatically join Him in the next.

Then today as I participated in our Spirit-filled service at our church in Locust Fork, Alabama, a Downs-syndrome man sat on the front row. Before any of the members of the congregation did, he raise his hands to the Lord. He joined in with the rest of the worshipers in songs of praise. He wasn’t doing what he saw others do because he faced the front of the church, and no one in the choir had lifted their hands as of yet. Again, I felt the Lord’s message. God had spoken to this man’s spirit though his mental capacity was minimal.

About  Echoes From the Past: 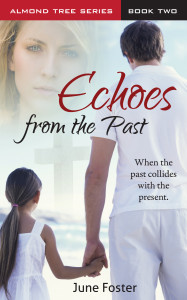 When Dave Reyes, senior pastor of New Life Fellowship discovers he has a six year old daughter, his life changes forever. He must reveal the truth to the congregation, but will they fire him and send him away in shame?

Social worker Betty Ann Johnston still grieves over the death of her police officer husband. But when he returns from the grave to torment her, she struggles to maintain her sanity. Witnessing Dave’s faith is her only source of strength. Will ghosts from her past destroy her, or will she find hope in the God of the Bible?

June can be found through her blog: http://junefoster.com.

2 thoughts on “What Christina Taught Me by June Foster”