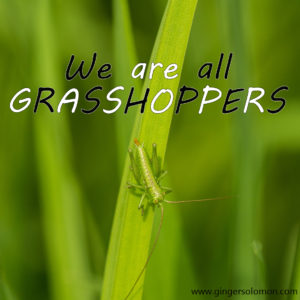 I have refrained from commenting on the race issue for a variety of reasons. My silence does not condone the actions of the extreme few, but since I am a white woman, I can’t possibly understand the life of any black/asian/latino person. I can only go by what I see, hear, and believe.
To that end, I am breaking my silence to share my heart and my story.
When the racial tensions first started–this time–I believe the Lord dropped a story into my heart. I didn’t share it then because I didn’t want to cause divisiveness between myself and my non-white friends. I share it now, so you can see my perspective on this situation.
In Numbers 13, we see the twelve spies sent into the Promised Land. At the end of that chapter, in verses 30-33, we see this:

“Then Caleb quieted the people in the presence of Moses and said, “We must go up and take possession of the land because we can certainly conquer it! ” But the men who had gone up with him responded, “We can’t go up against the people because they are stronger than we are! ” So they gave a negative report to the Israelites about the land they had scouted: “The land we passed through to explore is one that devours its inhabitants, and all the people we saw in it are men of great size. We even saw the Nephilim there — the descendants of Anak come from the Nephilim! To ourselves we seemed like grasshoppers, and we must have seemed the same to them.”

Sometimes we project our own views on those around us. I fear rejection, so I tend to see my experiences through that lens. I see rejection of me in people, even when that is NOT the case.
The Israelites believed themselves to be as grasshoppers and believed their enemy saw them that way as well, but if you read further along, in Joshua 2, Rahab tells the two spies sent into Jericho this:

“I know that the LORD has given you this land and that the terror of you has fallen on us, and everyone who lives in the land is panicking because of you.” (vs 9)

The people of the Promised Land, not just of Jericho but all over that area, were panicking. That doesn’t sound like people who planned to crush grasshoppers should they venture into their city.
I wonder then, do we see racism where it isn’t?
I am a wife to a “privileged” white man and a mother to five white sons.
I grew up in poverty. My father struggled to keep a job for any extended period of time–I was too young to understand, so I don’t know why. When I was fourteen, my mother kicked him out for that reason, among others I’m sure, but that’s the biggest one and the only one I remember. She worked in a factory–a hot, sweaty job, and then came home and did all the housework, cooking, etc. To my knowledge, my father didn’t do any of that–at least, not to my remembrance.
After he left, she worked hard but barely made ends meet. The house was double mortgaged, and I doubt the car was paid off. She made my clothes or I wore hand-me-downs. We ate simply. We had a garden from which we ate and canned vegetables. We NEVER used the dryer. EVER. I hung out clothes in the winter as well as the summer and brought them in stiff from freezing solid. We had to wait until they thawed before we could fold and put them away. We warmed our small “glorified” trailer (it was bricked in place but the size of a double-wide) with a wood stove, which I cut the wood for. I cut the grass. I cleaned the chimney.
I have two older half brothers. One died from Type 1 Diabetes when I was 12 (he was 32 and had lived with T1D for 16 years). Back then, treatment was a guessing game, and he was in the hospital more than out. My other brother was wild and was in and out of jail as much as the oldest was in and out of the hospital (probably an exaggeration, but he was gone a lot).
When I was a teen, there were times we didn’t have a phone. No cable, ever. We couldn’t afford it. I know of at least once when our car was repossessed.
I was an average student and worked a part-time job, beginning at age 16, to help my mom with bills. When I went to college, I managed to get financial aid. Otherwise, I would not have gone. After my first year, the money dried up, so I didn’t go back. I couldn’t afford it. I found a “trade” school that didn’t cost TOO much, so I took out a loan, went to school, graduated, and became a secretary. It wasn’t good money, but I had insurance and enough to pay some bills.
My husband — his father was a school teacher and his mother a part-time secretary. They were comfortable because they didn’t go out to eat, spend unwisely, or take vacations. My husband worked his way through college. He received a few academic scholarships, but not enough to pay for everything. He graduated with a Bachelors Degree. We got married one year before his graduation. Our first son was born the month before. He got a job TWELVE hours from our families. We moved with a six-week old child to a town where neither of us knew anyone and had no family.
He has worked his way to the position he has now. He’s worked hard. We have done well, because we scrimped and saved. Our sons (and daughters) did not have to pay their own way through school(unless they had to repeat a class), but they did work. But the supposed white “privilege” is no longer as pronounced as it once was or as the media portrays it. If a white man and a black man are vying for the same position, the black man is more likely to land the job, even if he’s not as highly qualified. Where’s the “white” privilege in that?

You ask me to believe that racism–hatred or intolerance of another race or other races–exists. And I do. I believe it grows stronger every day, sadly.
Why?
Because we let it be an issue.
I have NEVER looked on the color of a person’s skin to decide if they have good character.
Do I stereotype? Sure. We all do.
If I see a group of men of any color standing around with their britches half down their backsides and do-rags wrapped around their heads, I’m not getting out of my car. Common sense tells me this.
And yet our country rages. Repeatedly.
How many times have you seen a white cop beat a white man? How many times have you seen a black cop beat a white man? Or a black cop beat a black man?
Very few.
Why? It’s not because it doesn’t happen. It’s because no one tapes it. It’s not newsworthy. It doesn’t create the division and unrest that is happening in our country right now.
Did George Floyd deserve to die at the hands of those officers? NO! Emphatically, no.
Are all cops like those? Again, NO! Emphatically, no.
So, why is it okay for people to stereotype all cops based on a few disreputable ones, but it’s not okay for cops to stereotype black men (or anyone else) based on the disreputable ones? In both cases, their LIVES are on the line. I think for the cops more than the misrepresented.
For what it’s worth, which is probably not much, I HATE this injustice as much as anyone. It hurts my heart.
When I see the hashtag black lives matter (and I’m not tagging it on purpose), I cringe. When you say it is offensive for me to respond with all lives matter, I say it is equally as offensive to say that ONLY black lives matter, which is MY perspective on that hashtag.
Do black lives matter? YES! Emphatically, yes.
Does that negate the fact that ALL lives matter? No.
Black, white, asian, latino, babies, cops, executives, store keepers, criminals. Everyone’s life matters. None of them should die at the hands of another without a trial and due process. (Yes, I believe in the death penalty.)

I’m going to end with a story. A true story.

I was friends with a black woman. Her husband had a Bachelors Degree, but he was working a menial factory job. Why? Not because he couldn’t get a job, but because he didn’t THINK he could get a job. He didn’t even try. I don’t know if he would have succeeded or failed at the career he had a degree in, but I do know that his lack of try resulted in a lot of financial hardships for their family.

He was as a grasshopper in his own eyes. And it hurt my heart to see it.

PS. Because of the controversial nature of this post, I will be moderating comments. I choose to squash hate before it can be let loose, but I welcome your well-thought-out responses. Stay kind. I’m not accusing. I’m not belittling. I’m expressing my perspective.

2 thoughts on “We are all GRASSHOPPERS”