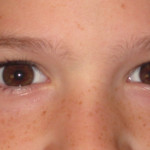 Can you see it?

The future. It’s but a moment away. There it goes; now it’s the past.

Some days, weeks, months, years…they feel that way. You’ve blinked and they’re gone. But what have you done with the time? Was it productive? Did you accomplish what you’d set out to do?

Lots of people make “New Year’s Resolutions” – I’m not one of them. If I find I need to accomplish something I don’t plan to wait until the new year to set it into motion. I’ve been trying for a number of years to lose weight. It seems to be an uphill battle, especially since I passed the big 40. I continue to fight, however. It’s something that’s important to me. I enVISION a time when I can get back into my favorite jean skirt.

I have a VISION for my future and that of my children. Will it match up to reality? Probably not, but I can shoot for a goal and trust God to show me how to accomplish it or to show me a better way.

Four sets of eyes are on this page. Mine and three of my children. Six of my seven children have brown eyes. Deborah looks like she’s getting ready to blink. That’s because she is.  LOL  She hates the flash in her eyes. I can sometimes get one good picture out of her before her eyes start blinking and watering. Her’s and Stephen’s eye color are indicative of most of my children.

Then I had Adam (my seventh). Blue eyes, just as pretty as you please. I love his eyes. Not only are they blue, but absolutely expressive. Can you see the mischief?

I see a touch of mischief in Stephen’s eyes too. He looks like he’s hatching up a plan to get Adam.  🙂

Can you believe that when I was little I was told I had brown eyes? I keep looking in the mirror and wondering, “Who on earth thought my eyes were brown?” All I see is green, with a touch of golden brown in the center.

Eyes have been called the windows to the soul. What would I see if I looked into your eyes today?