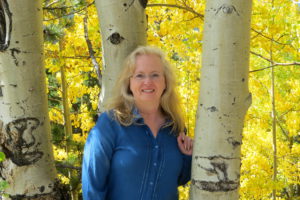 Sandy Nadeau loves to go on adventures, photograph them and equally loves to write about them. She and her husband did a lot of four-wheeling in the back country of Colorado and shared those experiences with others by taking them up in the mountains. Her writing experience includes a community news column in a small newspaper for twelve years, magazine articles and two novels with adventure, mystery, romance, but most importantly sharing God’s love. She is currently a member of the American Christian Fiction Writers. Married for 39 years, she and her husband are loving life as grandparents to their two grandchildren after the big move to Texas. Travel is their favorite thing to do and they don’t get to do it as often as they’d like. Adventure awaits around every corner, over every hill and mountain.

Have you ever found yourself in a predicament you weren’t expecting, wondering how you were going to get out of it? We did once, never made that mistake again.

When we moved to Colorado thirty years ago, we were so excited to explore the great outdoors. Our daughter was just six years old when we arrived. We lived in the foothills after a year, so we were even closer to destinations to hike.

One such day, we went to a park with a lot of trails. Our little girl loved to climb on the rocks, so we often went where she’d expend her energy.

She was about eight when we found our way up onto an area that was all rock. It is called the Rocky Mountains for a reason. We scrambled up areas that, well, we probably shouldn’t have. But we were having fun and not really paying attention to how we’d get down again. That would have been a very important detail of our climb.

We reached the top and marveled at the view of the snowcapped mountains in the distance. From our vantage point we could see how the foothills led right up into the fourteen foot mountains that continued to hold the snow from winter. It was breathtaking.

When it was time to head back down to the car, we looked over the edge in several areas and began to scratch our heads about how we’d get down. Checking where we came up, we realized we were not going to be able to go back down the same way. The ledges were too far apart. We kept checking other areas and nothing looked good. THIS was a definite problem.

My husband is quite tall at 6’4” so he had a real advantage to a long step down. For me and an eight year old were at a big disadvantage. He was able to get down an area that looked terribly precarious to us. We started to get scared. Not wanting to attempt it even with him guiding our steps by placing our feet on the small outcroppings to get us down. One slip…well, I didn’t want to think about it. It was a good fifteen foot drop.

This was where the trust factor really had to take over. My husband was safe below and would be able to guide and direct our steps to make sure we didn’t fall. We needed his help and protection to make it down.

The hero in my latest book, Steve, finds himself in a similar situation. He’s stuck in a crevasse of rock with a trapped foot. The heroine, Ronnie, has to fight fears that her emotions had developed preventing her from enjoying life. Both needed help to overcome their problems.

We all need help now and then. I was thankful my hubby was there and that we finally got down off those rocks to head home. Our fear can either paralyze us or motivate us. What will you choose?

More about Rescue Me: 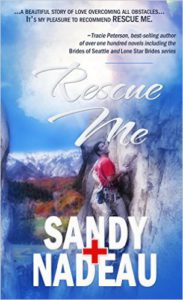 First Responder Ronnie Spencer has a no-dating-firefighters rule. She lost her father to a fire, and won’t risk the heartbreak of losing someone else. But when Steve McNeal returns, Ronnie’s heart is tested. How can she swear off dating a firefighter when she has to work with the one man she used to love? When the unthinkable happens, Ronnie has doubts. How can a loving God allow tragedy to stalk her life again? As her faith wavers, Ronnie must decide. Will their blossoming relationship be quickly extinguished by the very thing she feared, or will Ronnie trust God and allow her heart to be rescued–even if that means giving it to a firefighter?

“Romance is often complicated by life and Sandy Nadeau’s Rescue Me takes the reader through the obstacles that surround two people who have been wounded by those complications. Sandy pens a beautiful story of love overcoming all obstacles and God’s perfect love healing all wounds. It’s my pleasure to recommend Rescue Me.“
—Tracie Peterson, best-selling author of over one hundred novels including the Brides of Seattle and Lone Star Brides series