My mother-in-law took this picture at her house this past Tuesday. The thing is…she said it hadn’t been raining, nor was it scheduled to. 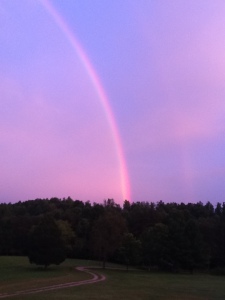 I think this rainbow is a wonderful example of God making something from nothing.

We all know how rainbows work–a little light, a little water equals a rainbow. Or if you don’t have water, then a crystal works well too. The light is still required, though. But God doesn’t need any of that to do what He does.  He can make something from nothing and has since the beginning of time.

Let’s look back real quick to the formation of the world. I’ll be skipping around a bit, but it’s all from the first chapter of Genesis.

Verse 1: “In the beginning God created the heavens and the earth.”

From what? Where did the stuff come from?

Contrary to popular theory (the definition according to dictionary.com: “a proposed explanation whose status is still conjectural and subject to experimentation, in contrast to well-established propositions that are regarded as reporting matters of actual fact.”), it didn’t come about with a big bang–well, I guess it might have, but only because God made it, not because there was this unexplainable explosion in the universe. (Okay, off my soapbox.)

And so on… God said something and it happened.

Chapter 1 concludes this way: “Then God looked over all he had made, and he saw that it was very good!”

He made something from nothing. In Romans 4, Paul writes about Abraham’s faith.  He says God “gives life to the dead and calls those things which do not exist as though they did.” If Abraham could believe for the promised child at the age of a hundred, then I should be able to believe or have faith for the promises God gives to me. 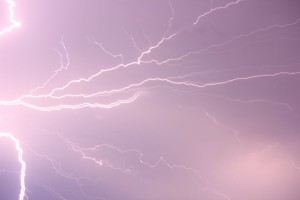 For what is faith? Hebrews 11:1 answers, “Now faith is the substance of things hoped for, the evidence of things not seen.”

Why do we have so much faith in the things we can see, those temporal things that are easily destroyed, rather than the promises of God, which are eternal and far more trustworthy?

I wish I had an answer to the question, but I don’t. All I know is that no matter what I’m going through, either with my chronic back pain, or just emotional crud, or whatever comes my way, God is ALWAYS with me, and He’s ALWAYS on my side, even when it doesn’t feel like it.

2 thoughts on “Something From Nothing”