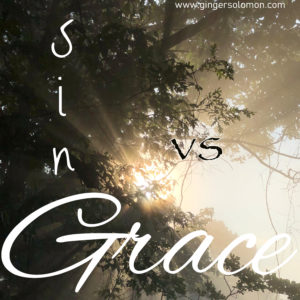 It’s been a while. I know. I say that a lot. It’s been hard to write. Anything. And that includes this blog.

Today, though, I felt led to share with you what I read this morning in Romans 5(HCSB version).

Verse 2: “We have also obtained access through Him by faith into this grace in which we stand, and we rejoice in the hope of the glory of God.”

Verses 6-10: “For while we were still helpless, at the appointed moment, Christ died for the ungodly. For rarely will someone die for a just person — though for a good person perhaps someone might even dare to die. But God proves His own love for us in that while we were still sinners, Christ died for us! Much more then, since we have now been declared righteous by His blood, we will be saved through Him from wrath. For if, while we were enemies, we were reconciled to God through the death of His Son, then how much more, having been reconciled, will we be saved by His life!”

There is no contest.

I would gladly die in place of my husband or children. I’m less likely to give my life for a member of my church family, but I might. Even less likely to die for my neighbor. And I am unlikely to step in front of a bullet for a stranger, though I may try to protect him or her from said bullet.

That phrase overwhelms me every time I read it.

Verse 15: “But the gift is not like the trespass. For if by the one man’s trespass the many died, how much more have the grace of God and the gift overflowed to the many by the grace of the one man, Jesus Christ.”

Jesus came and died for us, sinners. Strangers to righteousness because of our sin. And no matter our level of sin—from the small white lie to the most heinous of murders—He died for us and covered us in HIS GRACE.

How glorious is that?

Update on me:
November has been an excruciatingly busy month. I planned to participate in NaNoWriMo, but will not meet my goal for certain–unless God gives me some miraculous words in the next 9 days. I have written almost 5,000 words of my 30-50,000 word goal. 🙁 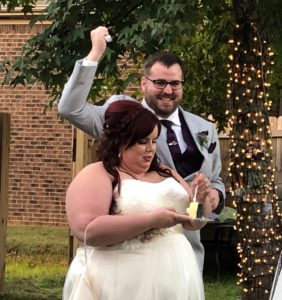 Nov. 2, my son married the love of his life. In this pic, he’s after the cheesecake. lol

They had a beautiful, evening wedding in their backyard. I have lots of pics, but this is the only one I’ll share, because it’s the best one.

On Nov 5, I had to make the heartbreaking decision to have my fur-baby put to sleep. Even now, it brings tears to my eyes. It wasn’t a hard decision, because he was in so much pain and obviously dying. When I knew I had to make the sacrifice (because I selfishly wanted him to be with me longer), I made the following video:

If it doesn’t work, please go here. It should play.

Then, by the grace of God (which I spoke about above) that Saturday, my husband, two youngest sons, and I went on a cruise. It had been planned since the spring or early summer, so even when we don’t understand what’s happening or why, God knows. He KNEW I would need to take a step away from the memories of my fur baby for a little while. It was hard to come back and him not be at the door to greet me as he always did, but I’m doing okay–despite my current tears. I had put away most of his things before I took him to the vet, so it would be easier.

So there’s my life in a quick and small nutshell.