This will be the second chapter of this as yet untitled book. If you have not read chapter 1, you can find it here. Enjoy. 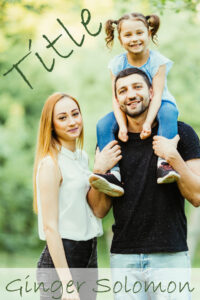 Ellie sat in the booth, chatting with Kaitlyn about her teachers and classmates while Todd ordered their meals at the counter. She glanced up and found him in the line, gazing in their direction. Heat filled her face, and she refocused on Kaitlyn’s words, chiding herself. His gaze had nothing to do with her. More than likely, he checked on Kaitlyn.

“Fine, I guess. We had a Mommy and Me day last week, but Mrs. Rosenblume came instead. Jenny said I’m strange because I don’t have a mommy. Is she right?”

“No, sweetheart. You’re not strange. Your family is different; that’s all. There’s nothing wrong with being different.”

“Yes.” Ellie shifted in her seat. How could she move this conversation in a different direction? Before she could think of a way, Kaitlyn asked another question.

“Does she live with you?”

The young girl tilted her head. “Where does she live?”

Ellie sighed and glanced over at the counter, hoping Todd was on his way with the food. He wasn’t. “With my dad in the house I grew up in.”

Did she? For a while she had, but not so much anymore. “Sometimes.”

“I think I’d miss Daddy if I had to live away from him. I love my daddy. He’s the bestest ever. He plays tea party with me, and we dance and sing with the princesses in the movies.”

Tears burned Ellie’s eyes. She’d felt that way about her father once, too. Then her brother died, and everything changed. She shook off the melancholy that rose whenever she thought of Anderson just as Todd delivered their meals to the table.

“It tastes just as good. Have you been here before?” Todd sat in the seat on the other side of table.

He nodded. “Let’s bless the food.” He bowed his head. “Father, thank you for this food. May it be nourishing to our bodies. Help Ellie find a solution to her situation. Bless our time together and help us make wise decisions, according to your will. Amen.”

Ellie turned to Kaitlyn. “Can I cut your sandwich for you?”

After Kaitlyn nodded, Ellie grabbed the plastic knife and cut the sandwich in half. “Would you like me to cut it once more?” At least she didn’t have to worry about whether her seat mate wanted squares or triangles since the sandwich was round.

“No, thank you. I can eat a whole half all by myself,” Kaitlyn declared.

“I like barbecue. It’s yummy.” She proceeded to show how yummy by shoving a large portion of the sandwich into her mouth.

“Kaitlyn Rose, you know better than that.”

“Yeth, Daddy,” she mumbled around the bite that was too big.

Ellie looked away before Kaitlyn saw the smile she couldn’t contain. As soon as she looked at Todd, she clenched her jaw to keep from giggling. A small one erupted, which she tried to cover with a cough. She took a sip of her drink. One more glance up.

He raised his eyebrow in her direction.

She shook her head and looked away, struggling not to laugh.

“So, Ellie. Tell me a little about yourself,” he said before taking a bite of his sandwich.

After clearing her throat, Ellie took another sip of her soda. “I’m twenty-three and have been living on my own for four years. I attended the University of Alabama—Roll Tide!—for a year before that.” She cut her eyes to Kaitlyn, who continued to eat. “I’ve worked at the zoo for most of those four years. I’ve known Mrs. Rosenblume for about the same amount of time. She’s been a great encourager in my life. We met at church.”

“What about before then? Siblings?”

Ellie stared at her plate. “I had a twin. He died our senior year of high school.”

“Thank you. What about you?”

“I’m twenty-seven. I graduated from the University of Alabama, Huntsville with a computer engineering degree. I married my high school sweetheart at the beginning of my senior year of college. Kaitlyn missed being my twenty-second birthday present by one day. Actually by only a few hours. My wife … died a few weeks later.”

“I’m sorry. I guess we’ve both had our share of pain.” She picked at the meat that had fallen on her plate then lifted the sandwich and took a bite. Flavor burst in her mouth, though her appetite had fled at the topic of their conversation.

He cleared his throat. “What do you like to do for fun?”

She finished chewing. “Read, I guess. Before my brother’s death, we liked to ski, both snow and water. I haven’t skied since he died. His friends didn’t know what to say to me, and my friends were never interested in going.”

They ate quietly for a little while. Ellie didn’t know what else to say. She poked at her potato salad with the plastic fork.

“Hmmm? Oh, yes. Just trying to figure out how to break the awkward silence.”

He chuckled. “Yeah. It seems a bit childish to list our favorite things, but maybe we should start there.”

“Okay. Which movie have you seen the most?”

A hint of red bloomed in his cheeks. “Frozen. Probably. Someone at this table begs to watch it quite often.”

“Aha.” Ellie giggled. “Maybe I should ask her these questions.”

“You’d probably get better answers. She okay?” He nodded to Kaitlyn, who now rested against Ellie’s arm.

“I would have never pegged you for a superhero follower.”

“Love them. I haven’t seen many of the most recent ones, but I’ve wanted to.”

“Couldn’t talk your dates into taking you?”

Heat filled her face. “I’ve never been on a date. My parents were ultra strict when it came to dating. Andy could date whomever he wanted. They didn’t care. If I even hinted that I liked someone, my dad would flip out. I learned to live through Andy’s dates.”

“Andy was your brother?”

Ellie nodded and shrugged. “Besides that, no one ever asked me until I went to college. By then, my friends had shared too many of their break-ups for me to want to experience them on my own. I partied some. I studied a lot.” She looked down at Kaitlyn, whose eyes had closed. “It looks like this one is ready to go.”

Todd nodded and gathered their trash.

Ellie exited the booth, sliding and supporting Kaitlyn as she went. When she got close to the edge, Todd slipped his arms under his daughter and carried her to the car.

Ellie led the way, opening and holding doors as necessary.

Once he’d buckled Kaitlyn into her booster seat, he got in and started the engine to warm up the car. The damp air wasn’t cold but carried a slight chill.

“I’d like for us to continue this informal interview, but I need to get her home for a nap. Would you like to come over for the afternoon? We could stop and pick up a few of the most recent superhero movies and binge-watch them. I’d like you to see where you’d be working.”

Ellie bit her lip. “Are you sure? Just because Mrs. R is matchmaking doesn’t mean we have to go along with it.”

“First, I’m sure. And second, I suppose I could find another sitter, but I’m very protective of Kaitlyn. I only hired Mrs. Rosenblume on the recommendation of a coworker. And I had her thoroughly checked out.”

Ellie stared at him. “You did a background check on her?”

“Would I find anything?”

“No. At least not anything that would keep me from being qualified to watch your daughter.”

“That’s a bit cryptic.” He drove from the parking spot, stopping before pulling onto the street. “I may choose to have one done in the future. I reserve the right to do that, but for now, I’ll trust your word. And Mrs. Rosenblume’s.”

He chuckled. “Extend our day or take you home?”

Ellie considered his invitation. She’d like to spend more time with him and see the movies. “Extend.”

I hope you enjoyed this second chapter of Todd and Ellie’s story. I had a title idea the other day, but now I’ve forgotten it. I should know better by now and actually WRITE IT DOWN when it comes to me. 🙁

Anyway, for all the mothers out there Happy Mother’s Day (tomorrow).