I have no idea if this is a true quiche or not, but that’s what it’s been called since I’ve been making it. I got the recipe from my mother-in-law. I have no idea where she got it.

We have an abundance of eggs at the moment, so this is a good way to get rid of some of them. 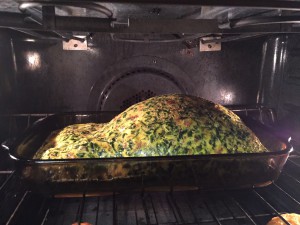 When I make this, I typically serve it with pineapple (fresh when I can, canned when I can’t), and bread. I am staying off bread myself, so I added a salad with mine instead.

I “think” this would qualify for the Trim Healthy Mama eating plan as an S meal. (I was just looking in their cookbook, and they have a similar recipe with a crust, so I’m gonna say it would qualify.)

This makes enough for my family of 9, so if you want to make less, just cut the ingredients in half and use a 9 x 9. It is, however, excellent eaten as leftovers.

I think the original recipe included a small jar of pimentos, but since I’m not a fan, I left it out. It has never made a difference to us. 🙂

I should explain the funky photo. We had this for dinner Wednesday night, which is when I took the above picture. I’ve never before had it swell like that–it did deflate later. What I figured out when I pulled the recipe out this morning is that I forgot to add the cheese (I made it from memory).

It tasted fine. I didn’t even notice. Neither did my family… So, if you don’t want to add all that cheese or any cheese, it still tastes fine.