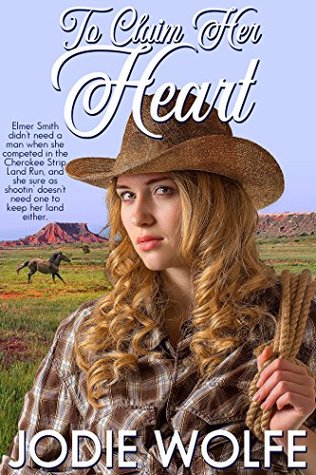 Blurb: In 1893, on the eve of the great race for land, Benjamin David prays for God to guide him to his ‘Promised Land. Finding property and preaching to the lost are his only ways of honoring his deceased fiancée. He hasn’t counted on Elmer (Elsie) Smith claiming the same plot and refusing to leave. Not only is she a burr in his side, but she is full of the homesteading know-how he is sadly lacking.

Obtaining a claim in the Cherokee Strip Land Run is Elsie Smith’s only hope for survival, and not just any plot, she has a specific one in mind. The land’s not only a way to honor her pa and his life, but also to provide a livelihood for herself. She’s willing to put in whatever it takes to get that piece of property, and Elsie s determined to keep it.

Review: I enjoyed this book. It took a fun look at role reversals. She has the know-how to farm the land, but he has the money. They both want the land, and neither wants to give up the prime spot. Their agreement turns into a humorous catastrophe. Or did it? 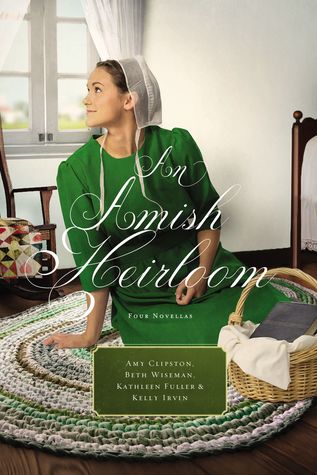 A Legacy of Love by Amy Clipston

g chairs for her future home with her fiance and is forced to acknowledge that his feelings for her have not quite gone away. As Susie spends time with Leon, she begins to recognize she is marrying the wrong man for all the wrong reasons.

The Cedar Chest by Beth Wiseman

Decades after inheriting her great grandmother’s cedar chest, Emma Fisher decides to pry it open only to discover a beautiful love story in the form of letters between her great grandparents. But as Emma immerses herself in their story, family secrets are revealed, and she must decide whether to share them to preserve family history or honor her great grandparents’ decision to leave them hidden.

The Treasured Book by Kathleen Fuller

For the past two years, Shane Broyles has felt God leading him to join the Amish. He’s staying with his friends Noah and Ivy Schlabach in Birch Creek, OH, where he is reunited with Lucy Fisher, an old friend of Noah’s family. Shane and Lucy have never revealed their feelings for each other, but when they stumble upon an antique Bible at a flea market, they feel drawn to each other and to the mystery of the contents found within.

The Midwife’s Dream by Kelly Irvin

Iris Beachy serves as a midwife in her district where she longs for a family of her own. When her friend’s brother Mahon Kurtz seeks her help in delivering the baby of two young teenagers who have sought refuge in their town, they begin to see each other in a different light. Unprepared for parenthood, the young couple leave their baby girl behind in an antique crib quilt resembling the one destined for Iris when she becomes a mother. Mahon and Iris come together to take care of the baby as they try to find her parents, and they begin to see new possibilities for their future.

Review: If you’ve read my reviews for any length of time, you know I enjoy reading Amish romance. These four stories were no exception. Each novella focused around a specific treasure, which I found to be a unique way to pull four separate stories into one collection. As always, the reverence for God and His creation was evident as were the sins and temptations common to all humans, whether Amish or “Englisch.” Each couple had obstacles to overcome to find their Happily-Ever-After.

The above books were sent to me by the author/publisher for the purpose of review. I am not required to post these, but do so honestly because I wish to support these authors and their work.

Click the titles to be transported to Amazon to purchase. 😉