Let me start by saying that I read the first book out of curiosity. I love Christy’s other books, but am not a big fan of mysteries, so I wasn’t sure. I have now read all of the ones published in this series. The reviews below are short because I am reviewing ALL of the books at once. I received them all from Christy in exchange for an honest review. And that won’t be hard. My individual reviews are listed after each book, but I’m telling you to go out and purchase this series RIGHT NOW. You can find them on Christy’s Amazon Author page.

My rating for ALL of the following books: 5+ roses out of 5 because they are THAT good. 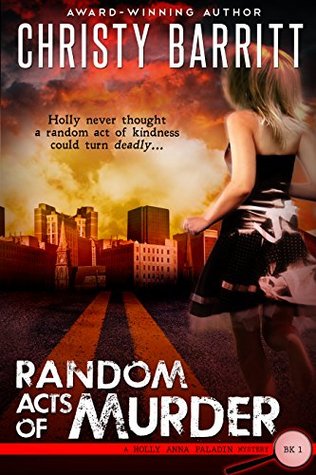 About the book: When Holly Anna Paladin is given a year to live, she embraces her final days doing what she loves most—random acts of kindness. But one of her extreme good deeds goes horribly wrong, implicating Holly in a string of murders. Holly is suddenly in a different kind of fight for her life.

Only two other people know Holly was at the site of the murder, and one of them is the killer. Making matters stickier is the fact that the detective assigned to the case is her old high school crush and present day nemesis.

The clock is ticking as Holly is forced to play a dangerous game. Will Holly find the killer before he ruins what’s left of her life? Or will she spend her final days alone and behind bars?

My review: Christy Barritt pulled me in to Book 1 of this series with her first words, “This had to be my worst idea ever.” And it turns out she was right. Somehow bad things find Holly. I laughed (and cried) as she worked to hide her many secrets, but the more she tried the harder it became. Especially after the real murderer started leaving HER belongings at the crime scenes. And Chase… oh my! Swoon-worthy cop with real-life issues. Definitely a book to read if you like suspense and mystery mixed with humor and a hint of romance. 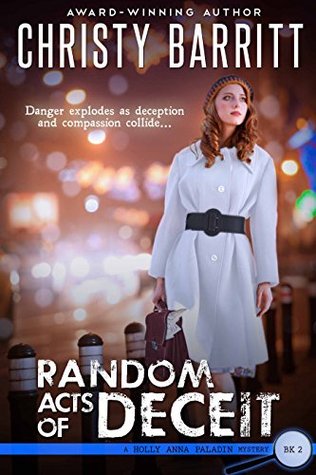 About the book: “Break up with Chase Dexter, or I’ll kill him.”

Whatever Holly decides, the consequences will either break her heart or break her soul. She tries to match wits with the masked man, but he’s always a step ahead of her. The more she fights, the deeper she’s drawn into the perilous situation.

Dealing with the ultimatum, her sister’s wedding problems, and riots that have broken out in the city, Holly’s nearly at her breaking point. She must discover the identity of this mystery man before someone she loves dies. But the deceit is threatening to pull her under . . . six feet under.

My review: Wow! This one was riveting, and the end was absolutely unexpected. I thought I knew who the mystery man was several times only to be proven wrong. I would be such an awful detective. In the end… Well, I don’t write spoilers, so you’ll just have to read who dies and how–if anyone really does die. 😀 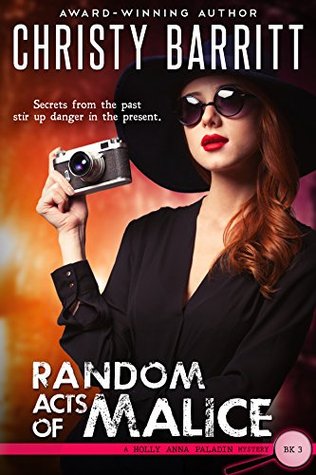 About the book: When Holly Anna Paladin’s boyfriend, police detective Chase Dexter, says he’s leaving for two weeks and can’t give any details, she wants to trust him. But when she discovers Chase may be involved in some unwise and dangerous pursuits, she’s compelled to intervene.

Holly gets a run for her money as she’s swept into the world of horseracing. The stakes turn deadly when a dead body surfaces and suspicion is cast on Chase. At every turn, more trouble emerges, making Holly question what she holds true about her relationship and her future.

Just when she thinks she’s on the homestretch, a dark horse arises. Holly might lose everything in a nail-biting fight to the finish.

My review: Lies, subterfuge, and distrust add up to a messed up relationship. And that’s only the beginning for Holly in this third book of the series. Pulling Jaime, her best friend, along for another adventure, Holly finds that things are rarely as they seem, and it’s best not to assume anything. This one is a nail-biter as Holly’s heart is on the line once again and we’re not sure if things will truly work out this time or not. Loved every minute of this one and loved the details about the world of horse racing. 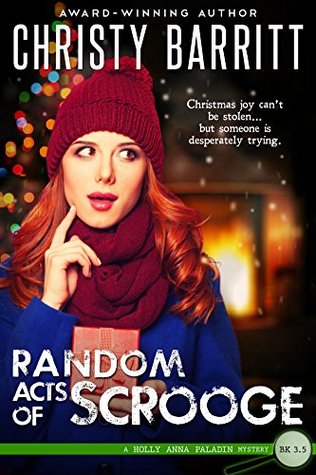 About this book: Christmas is supposed to be the most wonderful time of the year, but a real-life Scrooge is threatening to ruin the season’s good will.

Holly Anna Paladin can’t wait to celebrate Christmas with family and friends. She loves everything about the season—celebrating the birth of Jesus, singing carols, and baking Christmas treats, just to name a few. But when a local family needs help, how can she say no?

Holly’s community has come together to help raise funds to save the home of Greg and Babette Sullivan, but a Bah-Humburgler has snatched the canisters of cash. Holly and her boyfriend, police detective Chase Dexter, team up to catch the Christmas crook.

Will they succeed in collecting enough cash to cover the Sullivans’ overdue bills? Or will someone succeed in ruining Christmas for all those involved?

My review: It’s a crime to steal, but it’s even worse when the money was meant to help those in need. In the fourth book of the Holly Paladin Series, Christy Barritt touches on something that we all have to deal with, not only at Christmas time–the opportunity to be Scrooge-like because those around us are intent on being mean-spirited. This story had a bit more of a relaxed pace than the first three, but I loved it just the same. Holly’s heart for helping others is one we all need to have.