Anna O’Brien leads a predictable and quiet life as a map librarian at the illustrious Library of Congress until she stumbles across a baffling mystery of a ship disappeared at sea. She is thwarted in her attempts to uncover information, but her determination outweighs her shyness and she turns to a dashing congressman for help.

Luke Callahan was one of the nation’s most powerful congressmen until his promising career became shadowed in scandal. Eager to share in a new cause and intrigued by the winsome librarian, he joins forces with Anna to solve the mystery of the lost ship.

Opposites in every way, Anna and Luke are unexpectedly drawn to each other despite the strict rules forbidding Anna from any romantic entanglement with a member of Congress.
From the gilded halls of the Capitol, where powerful men shape the future of the nation, to the scholarly archives of the nation’s finest library, Anna and Luke are soon embroiled in secrets much bigger and more perilous than they ever imagined. Is bringing the truth to light worth risking all they’ve ever dreamed for themselves?

Review: I absolutely loved this book. Though released as a historical fiction, it has quite a bit of romance in it. Learning about cartography and the Library of Congress interested me a great deal. I’ve never been to the Library of Congress, but if I’m ever in D.C., I hope to see it. The characters felt real, and it was easy to feel as though I were a part of their lives. 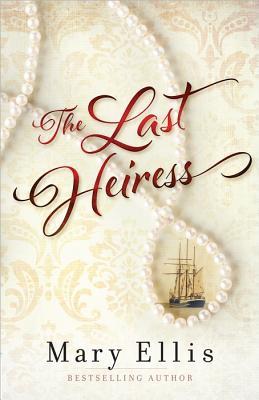 Bestselling author Mary Ellis (A Widow’s Hope) presents The Last Heiress, a new romantic standalone that intertwines the lives of a British manufacturing heiress and an American merchant caught in the turbulent time of the War Between the States.

When Amanda Dunn sets sail from England for Wilmington, North Carolina, she hopes to somehow restore shipments of raw materials for her family’s textile mills, which have been severely disrupted by the American Civil War. Though there is not much one individual can do, the wealthy young woman feels she must try, as her mother and hundreds of employees at Dunn Textiles are dependent on Southern cotton.

When Amanda meets Nathaniel Cooper, her desire to conduct business and quickly return to England changes. Though captivated by one another, neither is fully aware of the other’s true nature.

Nathanial, who on the outside appears to be a poor but hardworking merchant, is actually a secret Yankee sympathizer who will stop at almost nothing to bring about freedom for those who live under subjugation, even when that involves questionable judgment. And Amanda’s wealth is made possible by underpaid workers living in slums around the mills, not much different than American slavery.

Can these two earnest souls find the best in one another rather than focus on what could tear them apart? And though they both believe they are on God’s path, how will their decisions affect those around them?

Review: Other than a few brief slow parts in the middle, I loved The Last Heiress. Ms. Ellis did an excellent job highlighting some of the plights of the south during the Civil War. I don’t typically care for novels centered around wars (just a personal preference), but this one may be on the verge of changing my mind. I enjoyed reading this novel.