This is not a normal day for me to post. I know. But I have a lot of random thoughts roaming through my head, and I did a verse mapping yesterday that I want to share with you.

I write about love–romance, to be exact, but sometimes love is hard. It’s not all flowers and chocolate and fluttering feelings. Most times it’s a decision, an action, a struggle. Then there are the different kinds of love we feel–between a man and a woman, between a mother and child, between friends, and for those we don’t know. They are all characterized as love, but have different levels of emotional connection. There are times when I don’t know how to love a person, even someone close to me. What is the best and right way to show him/her love? A lot of times, I don’t even know how I want love shown to me.

I do know I’m a gifts person. I love little gifts to know that I’m being thought about. That doesn’t mean it’s the only way I can receive love, though. Words of affirmation are nice, as is quality time (as long as you let me decompress afterward). 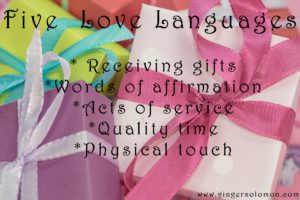 I like it when someone does something for me (acts of service), but I might not notice right away, and I may not say anything. As I was writing that, I wondered about the Five Love Languages. I searched the words and found http://www.5lovelanguages.com/ They have a love languages test. Here’s how I scored:

If I were to take the test for my husband (which I won’t do), I would guess his would be something like this:

Do you see the disconnect? His highest is my lowest and vice-versa. We struggle to understand each other sometimes–even after twenty-five years of marriage. We have to fight the uphill battle to get to the top.

Okay, enough about love. BTW, my marriage is fine. It’s just an example of why people struggle and give up. Love is not easy despite all the movies that portray that it is. It’s an uphill battle, almost every day. Giving 100%. But it is worth it. Every day.

So, life… months ago (like at Christmas time) the rains washed through our pasture and dislodged a part of our fencing. Since we no longer have any outside dogs and didn’t plan on having a steer this summer, we ignored it. Until this last week when I went outside and found one of our chickens dead. Something had entered our pasture and had a midnight snack. The only thing left of our poor hen was her feathers and a pile of bones. We fixed the fence, as best we could at the time. It will need further repairs in the near future, but I’m happy to say we’ve had no more casualties. 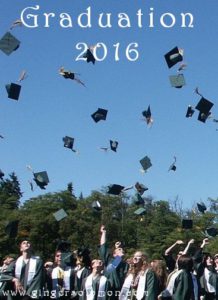 Son #2 graduated (without walking–he’s like that) from UAH (University of Alabama in Huntsville) with a Bachelors of Science in Engineering degree. I’m so proud of him. he’s still looking for a job, but we know God’s got something special out there just for him.

Daughter #1 will be graduating from high school in a few weeks. This fall she plans to attend a Bible/Missions school that our church sponsors called Masters Commission. It’s an intense missions-based school, so she’ll be living in a dorm with other girls. She’s excited. I’m excited for her, but also a bit apprehensive. My baby girl (not the youngest but always my baby) will be leaving home. I’ll miss her.

Son #3 finished his first full year of college and is busy scheduling a summer class and fall classes. He wants to get his engineering degree as well (he’s aiming for mechanical, whereas son #2 went for computer). Because of dual-enrolling, he’s on his way to graduating in three years.

Our home school co-op had our last day last week. I love that group of people, but I’m happy to be able to stay home on Fridays for a few months. Can anyone say WRITING TIME? lol

I was verse-mapping Hebrews 4:12 yesterday. If you’ve been in church for a while, you’ve heard it, but here it is: “For the word of God is living and active. Sharper than any double-edged sword, it pierces even to dividing soul and spirit, joints and marrow. It is able to judge the thoughts and intentions of the heart.” (Berean Study Bible)

I don’t know about you, but when I pictured this sword, I was thinking something long and intrusive. I mean, you know, deadly. Something a pirate or knight would use.

But what I found out is that the word translated sword is actually machaira , which was mainly used as a slaughter knife. It was a short sword or dagger  used for stabbing or cutting.

We can’t yell from the roof tops, brandishing our sword. We need to be up close and personal–one-on-one–to fight with the Word of God. And I don’t think it’s meant to bash our opponents over the head. It’s meant to slice out the sin, so the Son can enter.

Okay, so maybe you knew that, but sometimes it takes me a little while to catch on. 🙂

So there’s the long version of what’s going on with me. How’s your spring been?