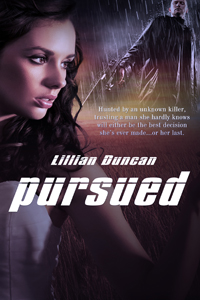 There are some books you can put down to come back to later and there are some you can’t. This was one that I didn’t want to put down. I had a little difficulty getting through the first few pages, but then it gets going and your off on the ride of your life – well, the ride of Reggie’s life. You thought your day was bad, you haven’t seen nothin’ ’til you read about Reggie’s day – from bad to worse.

I loved it. There were sufficient twists and turns to keep you guessing. What’s a good suspense if it’s easy to figure out? Loved Dylan. Gives me the shivers. LOL

In the normal course of events,their lives would never intersect…
But some accidents aren’t meant to be avoided.

When attorney Reggie Meyers crashes into Dylan Monroe on the freeway, it makes a bad day even worse—or so she thinks until she discovers she’s the prey in the deadly hunt of an unknown killer. Now, trusting this man she hardly knows is Reggie’s best chance for survival. The problem? Reggie doesn’t trust anyone.

When Dylan catches a glimpse of Reggie’s ransacked apartment, his protective instincts kick in. He wants to help her, but she’s not inclined to believe a simple country farmer has what it takes. Reggie doesn’t realize Dylan knows a lot about hunting—and being hunted. He’s up for the task of trapping a killer, keeping Reggie safe, and winning her heart—if she’ll let him.