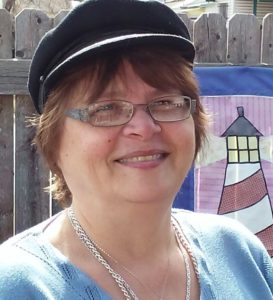 Leeann Betts writes contemporary suspense, while her real-life persona, Donna Schlachter, pens historical suspense. She has released four titles in her By the Numbers series, with Broke, Busted, and Disgusted releasing November 2016. In addition, Leeann has written a devotional for accountants, bookkeepers, and financial folk, Counting the Days, and with her real-life persona, Donna Schlachter, has published a book on writing, Nuggets of Writing Gold, a compilation of essays, articles, and exercises on the craft. She publishes a free quarterly newsletter that includes a book review and articles on writing and books of interest to readers and writers. You can subscribe at www.LeeannBetts.com or follow Leeann at www.AllBettsAreOff.wordpress.com All books are available on Amazon.com in digital and print.

“I prefer numbers to people, because numbers don’t change.”

I’d made this statement after a particularly hard day at work. I didn’t really mean it—at least, not in the global sense of not liking people. I simply didn’t much like people that day.

I was trained as an accountant, completing a business degree in college, but my love for numbers started as a child. I counted everything. And if the second count wasn’t the same as the first, I counted again. And if it was the same, I counted again just to confirm once more.

I counted ceiling tiles, floor tiles, cracks in the sidewalk, squares on someone’s shirt or tie. I counted people in restaurants, cars in parking lots, birds in flocks.

But if there was one thing I liked more than numbers, it was mysteries. Nancy Drew, Hardy Boys, Bobbsey Twins. And then as I got older, Sherlock Holmes and Agatha Christie. I liked the old-fashioned mysteries where the good guy always wins and the bad guy always get caught.

So about ten years ago, I heard about National Novel Writing Month, and I wondered if I had just one book in me. One, that’s all I wanted to write.

And since I figured I should write what I know, I decided on a mystery that included an accountant.

So I started writing. On November 11th. Already behind. I wrote like a fiend trying to catch up and then to keep up, because I am very competitive, very badge-oriented, and there was a badge to be won when I completed this challenge. Notice I said ‘when’ and not ‘if’.

I had no idea about plotting or character arc. I just wrote a story that had been tumbling around my head for a few years. I got to the last three chapters and had no idea whodunit. So I had to decide that, then go back and put in hints and red herrings, develop some characters a little more to make them suspects, and finish.

There are still days when I prefer numbers over people.

But thankfully, not so many as before.

G: Well, what happened to that story? And did you win the badge? Don’t leave us hanging. Please? BTW, I was a big mystery fan as a kid too. I still love a good suspense novel. 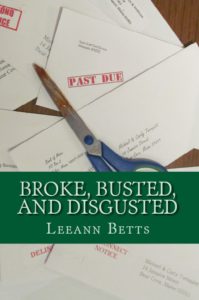 Wherever  you find Carly Turnquist, trouble is sure to follow.

At least, that’s what her husband Mike says.

Back in Bear Cove, Carly’s best friend is being courted by a smarmy stranger, and Mike’s latest client is unhappy with him.

When the client turns up dead and Mike is nowhere to be found, the police suspect him, and the video and paperwork they have that shows someone matching Mike’s description maxed out their credit cards and cleaned out their bank accounts is compelling.

But Carly knows her husband couldn’t kill anybody.

Broken, Busted and Disgusted can be found at Amazon.

Thanks for joining us Leeann.