Our pastor spoke yesterday about making goals. He shared the verse that Candee quotes below, pointing out that Paul had goals. Jesus also had goals–to teach others about the kingdom and to prepare the way for us to get there with his death and resurrection.

I’ve heard it said before that you can’t walk, drive, whatever in a straight line if you’re constantly looking back. A glance now and again reminds us how far we’ve traveled, but let’s not let it be our focus.

So today, instead of Monday Moms, Mayhem, Music, Memes, or Marriages… well, it might be a bit of mayhem, only because I almost forgot I scheduled Candee… we have a devotion to get us started on the right track for the new year. Be blessed… 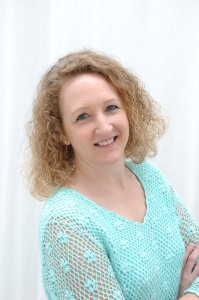 Candee Fick is the wife of a high school football coach and the mother of three children, including a daughter with a rare genetic syndrome. When not busy with her day job or writing, she can be found cheering on the home team at football, basketball, baseball, and Special Olympics games. In what little free time remains, she enjoys exploring the great Colorado outdoors, indulging in dark chocolate, and savoring happily-ever-after endings through a good book.

It’s that time of the year when we tend to evaluate the progress we made last year and dream of things to fill the blank slate of days ahead. But setting goals isn’t the only result and New Year’s isn’t the only time when it’s important to remember what Paul wrote to the Philippians.

“But one thing I do: Forgetting what is behind and straining toward what is ahead, I press on toward the goal to win the prize for which God has called me heavenward in Christ Jesus.” (Philippians 3:13-14 NIV)

While it may be easy to come up with a list of hope-filled things to pursue, learning to forget about the mistakes and setbacks of the past is difficult. In my debut novel Catch of a Lifetime, my heroine Cassie tries to escape painful memories by moving across the country for a fresh start. She thought that a new location would be enough but didn’t realize that she’d also brought a box full of bitterness with her. Through the story, she comes to a point where she has to face the past and deal with it.

Of course, a catalyst for Cassie’s journey toward forgiveness comes through an object lesson in the last place she expects—a football sideline. The game of football is filled with progress and setbacks, triumphant touchdowns and devastating penalties. But one thing that happens over and over is a team getting a new set of downs. A fresh opportunity to forget about the field position or result of the last play and move on.

What about you? Have you ever struggled to let go of the past? Is it harder to forget the victories or the failures? If today offers a “fresh set of downs” to make progress toward your goals, what are you going to do with them?

More about Catch of a Lifetime: 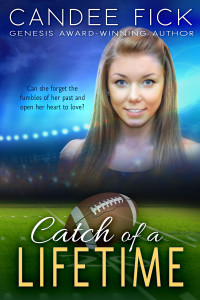 He breathes football. She shudders at the very mention of the sport. After a tragedy involving a football player destroyed her family, athletic trainer and graduate student Cassie moves across the country looking for a fresh start, but a change in financial aid lands her in the middle of her worst nightmare. Meanwhile, rookie coach Reed worries his dream career will slip away as injuries plague his players and his star receiver teeters on the brink of ineligibility. As the two work together to salvage the season, sparks fly, and Reed must eventually choose between the game he cherishes and the woman he loves.

You can see my review HERE.

Where to find Candee:

Do you make New Year’s Resolutions/Goals? If so, please share.

1 thought on “Moving On by Candee Fick”