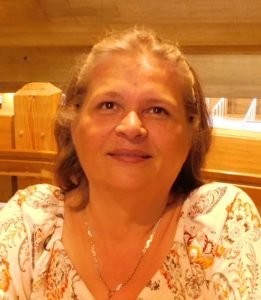 Donna lives in Denver with husband Patrick. As a hybrid author, she writes historical suspense under her own name, and contemporary suspense under her alter ego of Leeann Betts, and has been published more than 30 times in novellas and full-length novels. She is a member of American Christian Fiction Writers, Writers on the Rock, Sisters In Crime, and Christian Authors Network; facilitates a critique group; and teaches writing classes online and in person. Donna also ghostwrites, edits, and judges in writing contests. She loves history and research, and travels extensively for both. Donna is represented by Terrie Wolf of AKA Literary Management.

She can be found at the following places:
www.HiStoryThruTheAges.wordpress.com
www.HiStoryThruTheAges.com Receive a free ebook simply for signing up for our free newsletter!
Facebook: www.Facebook.com/DonnaschlachterAuthor
Twitter: www.Twitter.com/DonnaSchlachter
Books: Amazon: http://amzn.to/2ci5Xqq and Smashwords: http://bit.ly/2gZATjm
What Can Be Online University: https://what-can-be-online-institute.teachable.com/

My roles in Double Jeopardy include miner’s daughter, only child of Matilda Campbell, chief cook and bottle washer to a group of incorrigible miners, best friend to Polly, and fixer of fake weddings. Oh, and solver of mysteries.

The single character trait I wish I could curb would be my sharp tongue. Often I engage my words before my brain kicks in, and I’ve often said things I wish I could take back.

What traits do you most admire in others?

I admire those who keep their word. Which is why when I didn’t hear from my father for almost a year, I knew something was wrong. So I set out for the last place I knew he’d been—Silver Valley, Colorado.

What is your favorite childhood memory?

I loved it when Daddy came home. Mother and I were always so happy. I wanted him to spend all his time with me, and I got jealous when he and Mother insisted on retiring to their sleeping room without me.

What is your worst childhood memory?

And on the other side of that, standing on the walkway and waving goodbye to Daddy was the worst. I knew he’d come back, but my life seemed so empty when he was gone. And except for that one time, he did return, bringing me presents and stories from his adventures in far-off lands. 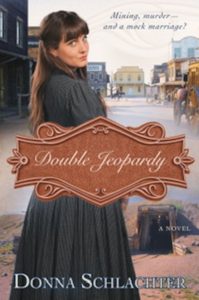 Set in 1880, Becky Campbell leaves her wealthy New York lifestyle in search of her father, only to learn he was murdered in the small town of Silver Valley, Colorado. Unable to return to her mother in humiliation and defeat, she determines to fulfill her father’s dream—to make the Double Jeopardy profitable.

Zeke Graumann, a local rancher, is faced with a hard decision regarding his land and his dream. After several years of poor weather and low cattle prices, he will either have to take on a job to help pay his overhead expenses, or sell his land. He hires on with this Easterner for two reasons: he can’t turn his back on a damsel in distress. And he needs the money.

Becky isn’t certain Zeke is all he claims to be, and after a series of accidents at her mine, wonders if he isn’t behind it, trying to get her to sell out so he can take over.

Zeke finds many of Becky’s qualities admirable and fears he’s losing his heart to her charms, but also recognizes she was never cut out to be a rancher’s wife.

Can Becky overcome her mistrust of Zeke, find her father’s killer, and turn her mine into a profitable venture—before her mother arrives in town, thinking she’s coming for her daughter’s wedding? And will Zeke be forced to give up his dream and lose his land in order to win Becky’s heart?

Leave a comment to enter a random drawing for an ebook copy of Double Jeopardy.

Dead. Dead as her dreams and her hopes.

Dead as a doornail, as her mother would say.

Just thinking about the woman drove a steel rod through Becky Campbell’s slumping back. Perched on a chair in the sheriff’s office, she drew a deep breath, lifted her shoulders, and raised her chin a notch. She would not be like the woman who birthed her. Pretty and pampered. A silly socialite finding nothing better to do with her days than tea with the mayor’s spinster daughter or bridge with the banker’s wife.

No, she’d much rather be like her father. Adventuresome. Charismatic. Always on the lookout for the next big thing.

Now her breath came in a shudder, and down went her shoulders again. She tied her fingers into knots before looking up at the grizzled lawman across the desk from her. “There’s no chance there’s been a mistake in identification, is there?”

He slid open the top drawer of his desk and pulled out a pocket watch, a lapel pin, and a fountain pen, which he pushed across the desk to her. “He was pretty well-known around here. I’m really sorry, miss.”

Becky picked up the timepiece and flicked open the cover. Inside was a photograph of her family, taken about ten years earlier when she was a mere child of eight and Father stayed around long enough to sit still for the portrait. Her mother, petite and somber, and she, all ringlets and ribbons. She rubbed a finger across the engraving. To R. Love M. Always.

Yes, this was his.

And the lapel pin, a tiny silver basket designed to hold a sprig of baby’s breath or a miniature rosebud—a wedding gift from her mother twenty years before.

She looked up at the sheriff, tears blurring her vision. “And his ring?”

The lawman shook his head. “No ring. Not on his body or in his shack.”

“But he always wore it. Never took it off.”

He shrugged. “Maybe he lost it. Or sold it.”

“I doubt he’d do either. My mother gave it to him when I was born.”

She peered at him. Had he stolen her father’s ring?

Or maybe Sheriff Freemont was correct. Maybe something as important as her birth hadn’t meant much to her father. Maybe she didn’t either. Was that why he left?

Because surely his absences couldn’t be explained by any rift between her parents.

Although, what Matilda Applewhite saw in Robert Campbell—Robbie to his friends and family—Becky had never understood. Her mother, who ran in the same circles as the Rockefellers and the Astors, with presidents and admirals—yet much to the consternation of her family, chose a ne’er-do-well like Becky’s father.

Becky set the two items side by side on the scarred wooden desk, next to the fountain pen. The same one he’d used to write his letters to her. Signing them, Give your mother all my love too. Your devoted father. She needed no more information. No more proof.

Not what she hoped for when she left New York a month prior, against her mother’s wishes, with little else to direct her steps than a ticket to Silver Valley and her father’s last letter. Written a year before, but as full of life, promises, hopes, and wishes as ever.

She collected the only three material evidences of her father’s existence and dropped them into her reticule then stood. “Thank you for your time, Sheriff. I appreciate my father’s death must be a difficult business for you.”

He stood and dipped his head. “Yes, miss.”

He cleared his throat, not meeting her gaze. “Still investigatin’, miss. Lots of things to look into.”

She bit back a groan. Unlike in the city, where manpower and resources seemed limitless, out here, there was just the sheriff and sometimes a deputy. “Thank you again. Please keep me updated.” She turned to leave. “Where is he buried?”

“Over by the church. Just ask the preacher. He can show you.”

Not like she was in any rush to see her father’s final resting place. She stepped outside and scanned the street. Surely the man who was more gypsy than family man would hate to think of his physical body buried beneath the dust of any one place.

A morose sense of humor invaded her. At least it was a way to get him to stay in one place longer than it took to eat a meal.

Sheriff Fremont joined her on the front step. “You’ll likely be returning home now, I ’spect.”

She looked up past his dimpled chin, his bushy mustache, his aquiline nose, into eyes as dark as coal. “No, sir. I have no plans to return.”

She blinked several times as she pondered the question, which was a very good one indeed.

Available at Amazon and fine booksellers in your area.