Pippin Cortland lingered by the wall of the University’s gymnasium, trembling in anticipation. Why she had ever agreed to her twin’s hair-brained scheme? How could they possibly get through the evening without their escorts discovering their duplicity?

For a moment she thought she saw her twin, Margil, with Ned Hawkins, and her heart stuttered. But her date for the night, Clint Keller, didn’t notice them, and she relaxed. Her sister had accepted two dates to the homecoming dance and insisted that Pippin go with Clint, who’d asked first, so Margil could attend with Ned when he finally got round to asking. “Besides,” Margil had said, “it’s our senior year. You have to go to homecoming at least once.”

The band played “Good Evening, Carrie.” Clint turned to Pippin. “Would you care to dance, Marg?”

Before she could answer, Clint swept her onto the floor. According to the twins’ plan, Pippin and Clint would dance during one set while the other enjoyed refreshments or took a walk. They were wearing identical outfits, something they hadn’t done since childhood.

The dance was nothing like the nightmarish images Pippin had conjured last night. Long ago dance classes proved valuable as Pippin slipped into a lively two-step for one the year’s most popular songs. Was you dreaming ‘bout me, Carrie? Clint was an excellent dancer. Her fears of having her feet stepped on in Marg’s uncomfortable heels proved unfounded. Also, dancing minimized talking.

They stayed for a second song. Clint had the physique of a football player, a talent for baseball, but the glasses of a scholar. When he smiled, Pippin wished he were smiling at her, Pippin Margaret Cortland. But of course he believed her to be Margil Rose Cortland.

That single word threw cold water on her spirits.

“I’m glad you agreed to come with me. I was afraid you would politely decline, as your sister has many a time.” He pushed his glasses back up his nose, something Pippin’s mother often did. Even with the glasses his brown eyes sparkled at her.

Pippin blushed. She had indeed turned him down on numerous occasions, not believing a man with his handsome features and fondness for sports could be seriously interested in a wallflower such as herself. Her mouth stayed closed as she searched for an explanation. How ironic, that Clint finally had the woman he had pursued for years but didn’t know it.

They danced for a moment before she said, “I’m curious as to how my sister is perceived. I want her to find happiness in this world, and not only in her fantasies.” She smiled and twirled the curls around her face, the way Margil did.

“How rude of me to mention her.” 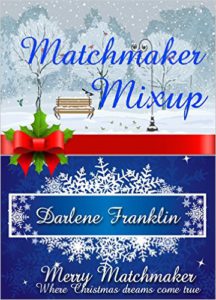 Pippin Cortland has decided to accept Clint Keller’s invitation to the Homecoming Dance their senior year. She’s said no for the last three years but wants to go at least once—with Clint.

Only Clint invites Pippin’s twin Margil instead. She agrees to go with Clint—and then accepts a second invitation as well. She insists Pippin pretend to be her sister and take her place with Clint.

When Clint falls for “Margil” at the dance, what is Pippin supposed to do?

Where to find Darlene:

Website/blog: http://darlenefranklinwrites.com/ (2 books will be given away every month, so stop by for further information!)
Facebook: https://www.facebook.com/Poet.Darlene.Franklin
Twitter: @darlenefranklin
Amazon author page: http://www.amazon.com/Darlene-Franklin/e/B001K8993A/

Darlene has graciously agreed to giveaway an e-copy to one lucky reader. Comment below before midnight Monday, August 22nd, for a chance to win.