Yesterday was the one year birthday of my debut novel, One Choice. I had hoped to have its sequel out by now, but alas the characters refused to speak to me until recently, so it will probably be another six months or so before that happens.

To celebrate, I giving away six e-copies. If you haven’t gotten around to purchasing a copy 🙁 or would like to give it to someone else, leave a comment here or on another post this week. I will draw six names from those who’ve commented on any post between Monday, Feb. 2 and Friday Feb. 6.

I will announce the winners Monday, Feb. 9. 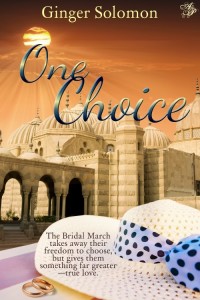 Cahri Michaels is American by birth, but Belikarian by choice. Being selected to participate in the Bridal March forces her to give up the independent life she’s created for herself. She’s not ready to be anyone’s wife, much less to a man she doesn’t know.

Prince Josiah Vallis despises the centuries old tradition—the Bridal March—that is forcing him to choose a wife from fifty women. Why does it matter that he’s twenty-five and still single?

When Cahri and Josiah meet, passion ignites. Will it spark a godly love that can see them through or will they be burned, never to be the same?