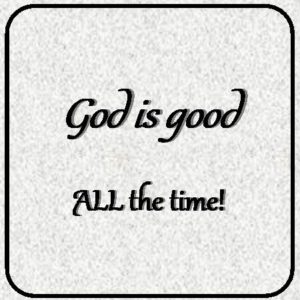 9/23 – I had surgery to remove a tumor from my pituitary gland, which was also pressing on my optic nerve and causing blurred vision. I spent the next two days and nights in the neuro ICU and then one day on the regular floor.

10/2 – I had an AWFUL headache which was not being relieved by the pain medicine they sent me home with. I spoke to my neurosurgeon’s nurse, and she suggested that I go to the ER to see if there was an underlying factor. I did and was admitted to the neuro ICU again for low sodium levels. For those who wonder… raising your sodium levels has to be done slowly and under controlled circumstances or it can cause serious side effects. They checked my blood every two hours the entire time I was in the ICU, so they could keep on top of my sodium levels.

10/5 – After my sodium levels reached almost normal, I was once again released with sodium pills and a restricted fluid intake (which I’ve failed at almost every day).

10/11 – I went to see my primary care physician and have blood drawn to reassess my sodium, thyroid, and iron levels.

10/17 (today) – I don’t have the numbers from my blood draw yet, but I’m doing better. I still have a bit of swelling around my sinuses (the docs went through my nose to remove the tumor). I think the swelling causes an occasional low-grade headache. Most of the time I don’t even take anything for it. I’ve resumed most of my normal activities, though I do have to do them in shifts as I tend to tire easily.

As for normal life around my house… it is, well, normal.

My oldest son moved back home. My second son moved away (in preparation for his new life with his bride). My oldest daughter is doing well away at school. I miss her even though she’s only thirty minutes down the road. She’s my beta reader and gives me feedback on my stories. Son number three is doing well in school and work. Daughter number two is loving her Comp 101 class (dual-enrolled) and has been invited to an invite-only writers group on campus after she completes this course because of a poem she wrote. In addition, she’s finishing her classes at home and works two jobs (usually totaling about 20 hours per week). Children six and seven (or boys four and five) are progressing well this school year.

Have I told you lately how much I love being a mom and home school teacher? There are times when it’s frustrating, but God (I just love that caveat) always gives me the grace and mercy I need to see through the dark tunnel of irritation and frustration to the light of knowledge and understanding.

God is Good. ALL THE TIME.

Even when I felt like my head was going to explode from the pain. Because otherwise I wouldn’t have known about the low sodium issues, which could have caused me to have seizures.

Even when I don’t understand how He’s going to work something out for His glory.

Even when I’m “walking through the valley of the shadow of death.” I don’t have to fear the evil around me because He “is with me.”

Your turn. Fill in the even when above.