Author Dawn V. Cahill writes “Stories of Victorious Faith for the 21st Century,” stories
of ordinary Christians following hard after Christ in a world of terror and violence, of
upside-down morality, of hostility to Judeo-Christian values. She also blogs about puppies, substance abuse, and single parenting. She has written several newspaper articles, two Christian contemporary novels, and more limericks than she can count. Email her at dawn@dawnvcahill.com, or find her on Amazon. She is a member of American Christian Fiction Writers (ACFW). Website: dawnvcahill.com

From Conception to Birth: My Story’s Journey

Picture this: Author wannabe just received professional feedback on her first novel. Not good! Wannabe feels downcast, and thinks, Maybe I just need to take a class. So she signs up for an online Fiction Writing course from Fiction Master himself, Jerry Jenkins.

In Assignment 1 she’s told, list a half-dozen ideas for novels you hope to write some day.

That author wannabe was me, and here’s one of the ideas I came up with.

“Twin sisters own a dance studio. One of them becomes a Christian and suddenly she feels differently about so much. She wants to start using Christian music in their lessons. She no longer feels right about some of the ‘shortcuts’ she and her sister took to reduce costs and hide income on their taxes. Her boyfriend doesn’t understand her new convictions, and they break up. All this creates a huge conflict between her and her twin. How will she handle it?”

And thus, Sapphire Secrets was conceived.

Next assignment: Character biographies. And somehow, a bit of myself creeps into the supporting character of Scott. Like me, he loves Christian hip-hop. Yet he comes across as strait-laced – a serious-minded engineer who can’t stand his teenage neighbor’s subwoofer. This little quirk led to an entire subplot between Scott and his neighbor that I never saw coming!

Then came the lesson on dialog. I was to think up dialog between two completely different characters. Not as easy as it sounds, especially when you challenge yourself, as I did, to think up as odd a character as possible. That’s how Vienna came to be. She’s an opera-loving wild child, the foil to Scott.

Again, a whole new situation that just seemed to write itself.

As the book grew and developed, eventually it grew legs – a plot. And arms – an inciting incident. And a heartbeat – emotion and conflict. A brain – plot twist. By the time it was born, it had taken on a life of its own, and turned into something I didn’t know I was capable of.

The book almost wrote itself.

Funny how that happens, isn’t it? It’s as though Sapphire Secrets’ story was already there, dying to be told, and just happened to use me as the instrument. 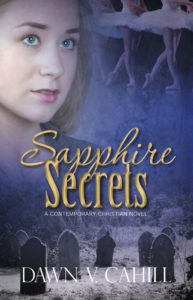 Twins Livy and DeeDee McCreary open a dance studio in honor of their late mother, whom they lost when they were six. Problem is, Livy remembers nothing of the day her mother died. The more she questions her family about that awful day, the more she suspects she’s been lied to all her life. While she’s seeking answers to what really happened, she keeps crossing paths with handsome engineer Scott Lorenzo, who compels her to question the New Age philosophy she was raised on. What if there is a personal God out there who cares about her?

Before Livy can discover answers, a brutal accident interrupts her search. Her life flips upside down as she faces a future she is not prepared for. Yet the unanswered questions continue to haunt her. Can she find the strength to keep on with her quest, even if it means losing the two people most dear to her—her twin, and the man she loves?
2015 Finalist, ACFW First Impressions Contest