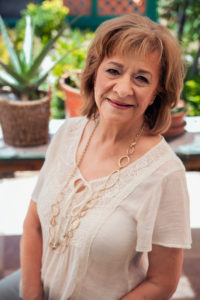 An award-winning author, June Foster is a retired teacher with a BA in education and MA in counseling. June has written four novels for Desert Breeze Publishing. The Bellewood Series, Give Us This Day, As We Forgive, and Deliver Us, and Hometown Fourth of July.  Ryan’s Father is available from WhiteFire Publishing. Red and the Wolf, a modern day retelling of Little Red Riding Hood and The Almond Tree Series, For All Eternity, Echoes From the Past, and What God Knew are available from Amazon.com. Misty Hollow and A New Family are published by Helping Hands Press and available at Amazon. June enjoys writing stories about characters who overcome the circumstances in their lives by the power of God and His Word. Find June online at junefoster.com.

Since I write contemporary romance, this novella challenged me like nothing else I’ve written. The heroine starts out in the present time and travels back to the 1950’s to fall in love with the hero from that era. Really fun was doing research on the culture, hairstyles, expressions, and food from the day. This excerpt is the last scene from chapter one where Emily first discovers life is not the way it used to be in present day Raccoon Creek, Alabama.

Emily thumbed through the newspaper. It must’ve found its way from the attic where she kept Grandma’s old scrapbooks, diaries, and keepsakes. But something was wrong. The paper was smooth and white, not brittle and yellowed like a memento from more than sixty years ago. An ad for an Arvin black and white TV caught her attention. Yep. Definitely a paper from Grandma’s day.

Emily paced the living room floor. Where was her cell phone? And the Samsung flat screen TV? Gone and in its place, a free standing Zenith with strange dials. She marched into the kitchen in need of another cup of coffee. Her mouth dropped open again. No Keurig. Only an old fashioned percolator. Most everything else in the kitchen looked the same, except more shiny and new. Had she completely lost her mind?

Okay, enough. She had a brain tumor causing hallucinations. Or she was having a mental breakdown. WebMD would have information.

In the dining room, Grandma’s old high-topped mahogany writing desk where Emily kept her computer sat empty. Instead, her lovely jade plant with its round, thick leaves graced the shiny surface. Only thing, the plant must’ve sprouted a hundred more leaves. It had doubled in size since she watered it earlier this morning. But the laptop was missing. Someone must’ve sneaked in during the night and stolen it.

Plopping down on the couch, Emily covered her face, trying to keep the tears inside. But no luck. The waterworks ran down her cheeks.

Feeling dizzy, she surveyed the room. The snow globe still sat on the side table. Before she’d drifted off, the snowman had winked at her. Yep. She had a mental disorder. Only one thing to do. Go back to Mr. Hardwicke’s drugstore and ask him to recommend an over-the-counter medication.

More about Christmas at Raccoon Creek: 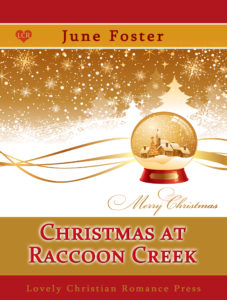 Emily Eason wants to distance herself from her parents’ opulent lifestyle in Birmingham, Alabama, and enjoy life in the rural village of Raccoon Creek and her fifties-style home. But after gazing into the little snow globe she purchased from Hardwicke’s Drugs and Gifts, she finds herself transported to another time—her grandmother’s era.

Lance Hardwicke is the pharmacist and owner of Hardwicke’s Drugs. Four years of pharmacy school didn’t allow for much of a social life. Gorgeous Emily Eason, nurse and resident of Raccoon Creek, has captured his attention. The next time she comes in the store, he’s determined to ask her out. Maybe take her to Birmingham to see the Christmas lights in his brand new orange and white ’53 Pontiac Pathfinder.

Can love span the fifty-year gap standing between them?

To buy the book: Amazon.