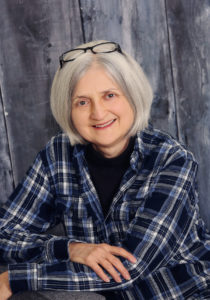 The fiction bug bit Gail later in life, and she’s hopelessly addicted. Her World War II fiction honors women who
made a difference in that era despite great odds. Her second love, teaching, leads to facilitating writing workshops and retreats where she loves
cheering others on. Gail lives with her husband in Northern Iowa and enjoys Arizona’s Ponderosa Pine forest in the winter months.

Glenora, what’s it like working in your dad’s garage?

Stinky—gas fumes. Grease all over the place, and farmers tracking in manure. Not for the fainthearted.

Where would you rather be?

You would ask that … about a million places. I’d rather be in the kitchen baking, down by the river enjoying its stark winter beauty, visiting with Aunt Henrietta, or …

Is that a longing look I see?

Well, everybody in town already knows I’d rather be in a classroom or lab down at Iowa State.

You won a scholarship, right?

Yes, I’ve wanted to be a home economics teacher forever. But that dream is water under the bridge. No use wasting time thinking about what might have been … like a lot of other things.

Mama’s death was just the beginning of giving up my dreams. How could we know this miserable war would start, and when the Japanese attacked three years ago this month, all of our lives would turn around?

That’s for sure. They sank the USS Arizona, and my boyfriend Joe went down with her. That was the end of those dreams.Yours turned around?

So you’re working here in your father’s garage because…

My brother Red joined the Navy soon after Pearl Harbor, like lots of other guys from here. So many have signed up since then, there’s hardly a fellow my age left. Everybody’s doing their bit for the cause, and so am I. Not complaining, since I’ve got it so much easier than our boys over there.

When the war ends, what do you foresee for yourself?

I try not to think of that. But when I do, the future hinges on Red. Will he come back from overseas? If he does, will he still be able to crawl under farm vehicles here in the garage, or do the figuring it takes to run this place?

You realize a typhoon struck his ship, don’t you? We haven’t heard anything more, and it’s been months. You can imagine this really takes a toll on my dad.

Certainly. But you seem to maintain a steady outlook. How do you do it?

Steady? I’m not so sure about that. You just face every day as it comes and try to get through it. You hope no telegram will arrive … you hunker down and do what you have to do.

It does help that my dad’s buddy, Slim, sent his nephew to help Dad out with the workload. His name is Hank, and he was wounded in North Africa. Having him here allows me to work on the books. Believe me, they need lots of work—Dad never was one to keep careful records.

Besides that, I keep busy with housework and our big garden in summer. I can a lot of vegetables for the winter—gotta do my part there, too, so more food can be sent over to our boys.

Yes. Thank you so much for sharing your perspective with us. I surely hope this war ends soon and your brother comes back safely.

You and me both. Just between us, I hate to think of working in the garage for the rest of my life, but if that’s what I have to do, so be it.

Just the other day, Hank said the war taught him that we mustn’t ever give up on things … as long as we’re still alive, there’s always hope. How can I argue with a guy recovering from severe war wounds?

Such a powerful sentiment, and a fitting end to our interview.

More about Kiss Me Once Again: 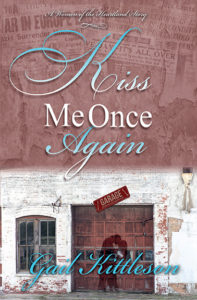 No one ever accused Glenora Carson of being a breathtaking beauty. Her tall, gangly figure and angular face are more solid midwestern stock than Hollywood glamour. But Joe liked her. He even told her, “You’re the one for me.” He gave her a locket with his picture inside, to remind her of him while he was away, serving his country on the U.S.S. Arizona.After December 7, 1941, Glenora shelves her dreams of attending college on the scholarship she was offered by Iowa State University, locks her heart away, and focuses on holding down the home front by helping out the family business – Carson’s Garage. The grease-stained overalls didn’t do much to compliment her female figure, but they cover her female heart well enough.That is, until Hank Anderson, a wounded warrior back from battle, walks into the garage and into Glenora’s life.Is an old maid’s future Glenora’s fate, or will Cupid throw a wrench in her plans?

1 thought on “Character Interview with Glenora Carson by Gail Kittleson”