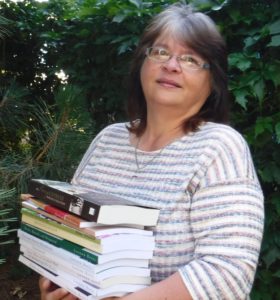 Donna lives in Denver with her husband Patrick, her first-line editor and biggest fan. She writes historical suspense under her own name, and contemporary suspense under her alter ego of Leeann Betts. She is a hybrid author who has published a number of books under her pen name and under her own name. She is a member of American Christian Fiction Writers and Sisters In Crime; facilitates a local critique group, and teaches writing classes and courses. Donna is also a ghostwriter and editor of fiction and non-fiction, and judges in a number of writing contests. She loves history and research, and travels extensively for both. Donna is proud to be represented by Terrie Wolf of AKA Literary Management.

You can find Donna at the following locations:

A Prickly Affair came about as the result of a long-standing friendship, a step-mother who I dearly loved, and a desert oasis I longed to write about. Mary Davis, a good friend, contacted me because I’d worked with her on a previous romance collection, wanting to know if I was interested in another, and I said yes. My step-mom and my dad loved Cave Creek, Arizona, and got married in a little chapel in town there, and I wanted to set a book there because I love the town, too. Being a writer with a pen name, I thought it might be neat to have my main character write under a pseudonym, too.

As with most of my books, my main character, Lily Duncan, is slightly autobiographical. She is strong and independent—or so she thinks—but she also recognizes something is missing in her life. I think readers will connect with the deep longing in her heart.

As for my hero, Peter Golding is named after a chemistry professor I had in college. To be honest, I was a little afraid of him—he seemed so unapproachable. But as the semester went on, I found out he had an incredible sense of humor along with a good dose of an inflated opinion of his own self-worth. My Peter comes west to “rescue” Miss Daisy Duncan, Lily’s pen name, from this western backwater of Arizona Territory and whisk her off to the City. Boy, does he have a thing or two to learn!

Writing a romance is challenging for me for two reasons: as a suspense writer, I tend to have three or four subplots going on at the same time, but novellas just don’t have the word count to support that. At the same time, I want to intrigue my readers to keep them guessing, so at least a small subplot is imperative.

The other thing is I must be certain that the hero doesn’t simply come in and save the heroine. Writing a strong female character helps with that, but I don’t want my male character to look weak, either. He has to have certain abilities that will help him save the day at least once.

Getting to the romance can also be a challenge. There must be a reason why these two get together. It’s why we read romance, right? One reviewer said she couldn’t understand why my characters ended up falling in love. We must keep in mind that people in the 1880’s wed for different reasons. Their courtship—if there even was one—looked different than today. For Lily and Peter, they wrote about love and published love stories, but had never been in love. Yet they were drawn to this other person who was completely unlike them and whose life goals were completely different. I think this is a picture of what God does in our own lives. If we were whole, we wouldn’t need Him, and we wouldn’t need a spouse. Yet the combination of our differences makes us whole as a couple, and when we use our passions, experiences, and talents for Him, we are complete in Him.

Next on my plate is the release of The Mail Order Brides Romance Collection in February, also from Barbour Publishing. Then I start planning for teaching at a conference in February and teaching an ACFW online course in May. Already it’s an exciting and busy year ahead!

About A Bouquet of Brides Collection 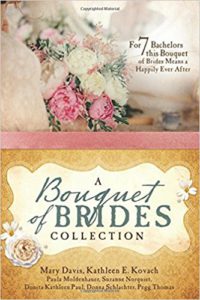 Meet seven American women who were named for various flowers but struggle to bloom where God planted them. Can love help them grow to their full potential?

A rough-and-tumble cowgirl, “Cactus” Lil Duncan longs for true love, but is afraid to let down her prickly exterior when a city slicker from New York City, with less-than-honorable intentions, tries to win her heart and her hand.

And now, an excerpt:

Sally Jo sank to the ground beneath the pain of her wrenched ankle. “Drat. I simply cannot walk one more step in these infernal boots.”

Thomas Peabody, broad of shoulders and narrow of waist, knelt beside her, cupping her aching foot in hands more accustomed to roping steers or shooting the eye out of a gnat at a hundred yards. “Miss Sally, allow me to assist you.”

Sally Jo stared into his eyes. Why hadn’t she ever noticed they matched perfectly the color of the summer sky? “Why, Mr. Peabody, you’re most gallant.”

He straightened, reached a hand toward her, and pulled her to her feet. When she tried to put weight on her aching foot, a jab of pain like a hot poker shot through her, and she collapsed into his arms.

Right where she wanted to be.

He pulled her near, and she closed her eyes, offering her mouth to him. Greedily, as though drawing his very life essence from her, he covered her lips with his own. When she thought she would suffocate, she opened her eyes, and saw mirrored what her racing heart telegraphed to her own mind: this was love.

Lily Duncan surveyed the words written on the page as she chewed the end of her fountain pen. Ink blotches on her fingers attested to her hard work this morning. A clicking sound like a metronome tickled at the periphery of her hearing while she considered whether she needed to change the word telegraphed to something more ooshy-gooshy romantic.

She tipped her head to listen. What was that sound?

Just the right amount to wet your appetite for more. It sure did for me.