Besides being a member and active participant of many writing groups, Carole Brown enjoys mentoring beginning writers. She loves to weave suspense and tough topics into her books, along with a touch of romance and whimsy, and is always on the lookout for outstanding titles and catchy ideas. She and her husband reside in SE Ohio but have ministered and counseled nationally and internationally. Together, they enjoy their grandsons, traveling, gardening, good food, the simple life, and did she mention their grandsons?

Brown not only has her award winning (Winner of the 2015 Christian Small Publisher Award in General Fiction, nominated for an Epic Award, RWA International Digital Awards finalist in Inspiration, Laurel Award finalist, Selah finalist; Genesis semi-finalist) debut novel, The Redemption of Caralynne Hayman, available for purchase now, but a companion book called West Virginia Scrapbook: From the Life of Caralynne Hayman, filled with tidbits of information about West Virginia.

A fun, lighthearted mystery series began with the first book: Hog Insane, introducing Denton and Alex Davies and now her second book in this series, Bat Crazy. Her WWII romantic suspense Spies series began with With Music In Their Hearts, featuring the first of three red-headed sisters, three spies, and three stories.

Carole can be found at the following sites:

Have you a hobby that you absolutely can not give up and see no reason why you should?

Denton Davies (from my Denton and Alex Davies Mystery series) has two hobbies he loves, fishing and Big or Unusual words. He has a fondness for seeing how many times in a week he can use his chosen word. Silly? Maybe. Does he get enjoyment out of it? Yep.

And that’s what hobbies are for, right?

Some of mine include:

Why have a hobby?

Denton is a smart amateur detective. He has the ability to put the pieces of the mystery-puzzle in the right places. He’s tenacious when it comes to pursuing clues. And his feelings don’t get easily hurt when others refuse to cooperate as he wants.

That and his love of reading mystery books, spurs his love of words. His mind works that way. So how do hobbies benefit us?

Admittedly, a bit annoying to Alex, his wife, in hearing the word over and over, but she loves him. 🙂

What hobby do you have that you can’t imagine giving up? 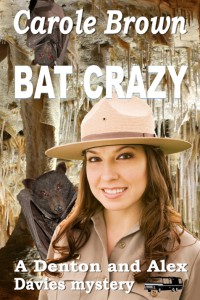 Denton doesn’t think so and Alex hopes not, but who are they to quibble with the local gossip?

Transmission problems and a blown tire land Denton and Alex Davies right in the middle of a dilapidated, unfriendly town that’s welcoming no strangers, least of all nosy ones with a bent toward solving mysteries.

But with support from the town detective–an admirer of the Davies–and their own tenacious personalities, Denton and Alex aren’t easily scared off. Not when warnings in the form of painted bats show up on the porch of their rented cabin, not when the mayor threatens to run them out of town and not even when Denton finds the bones . . .

An ancient story, a bit of a map, a lost jewel and even a bat clan serve to provide the Davies and their sidekick, Taffy, the dog, their hardest case so far.

Thanks for joining me, Carole. Denton sounds like an interesting man.

As for hobbies…I like to crochet, and I do some sewing. 🙂