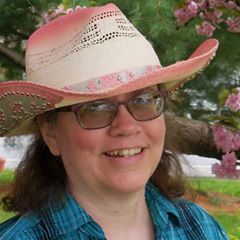 Jodie Wolfe creates novels where hope and quirky meet. She is a member of American Christian Fiction Writers (ACFW) and Romance Writers of America (RWA) and has been a semi-finalist and finalist in various writing contests. A former columnist for Home School Enrichment magazine, her articles can be found online at: Crosswalk, Christian Devotions, and Heirloom Audio. She’s a contributor for Putting on the New and Stitches Thru Time blogs. When not writing she enjoys spending time with her husband in Pennsylvania, reading, walking, and being a Grammie. Learn more at www.jodiewolfe.com.

Tell us about your latest book.

Here’s the back cover blurb:

To Claim Her Heart 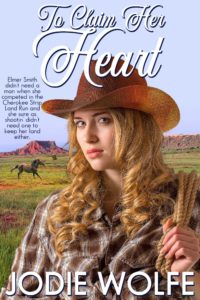 In 1893, on the eve of the great race for land, Benjamin David prays for God to guide him to his ‘Promised Land. Finding property and preaching to the lost are his only ways of honoring his deceased fiancée. He hasn’t counted on Elmer (Elsie) Smith claiming the same plot and refusing to leave. Not only is she a burr in his side, but she is full of the homesteading know-how he is sadly lacking.

Obtaining a claim in the Cherokee Strip Land Run is Elsie Smith’s only hope for survival, and not just any plot, she has a specific one in mind. The land’s not only a way to honor her pa and his life, but also to provide a livelihood for herself. She’s willing to put in whatever it takes to get that piece of property, and Elsie’s determined to keep it.

What inspired you to write this story?

Almost 20 years ago my mother-in-law showed me the place where one of her relatives had claimed a piece of property during the 1893 Cherokee Strip Land Run. It was the last great race in our country for property. The original homestead was partially built into a hillside and lay in ruins crumbling, but I could already imagine characters who sought out that piece of land.

How do you select the names of your characters?

The hero was easy. I used a compilation of several of my husband’s relatives who made the run. I thought it would be a fun way to give tribute to them. That’s how I came up with Benjamin David.

As for my heroine, her full name is Elmer Smith. I wondered what would happen if a father only had daughters. How would he name his final daughter? I thought by the fifth girl in a row, he might decide to give her a masculine name, especially as she was his last child due to his wife having died giving birth to her. I just recently found out from my brother-in-law that one of the relatives was married to a Nancy Smith. 🙂

Name a fun tidbit about your new release.

At the beginning of each chapter, I have quotes from Mrs. Wigglesworth’s Essential Guide to Proper Etiquette and Manners of Refined Society. My characters usually do the complete opposite of whatever advice is given. I’ve had such positive feedback from advanced readers in regard to Mrs. Wigglesworth, that I have an ebook of her sayings releasing on May 21st. I’ll be giving away a copy of this ebook to one of your readers so be sure to leave a comment.

For once in all of her days, Elsie welcomed the name Pa had insisted on when her life began and Ma’s had ended.

“Ain’t your son.” Ain’t no one’s son. Elsie shifted her Stetson lower to ward off the man’s scrutiny.

“There’s no need to get your prickles up. Do you testify you’re at least twenty-one years of age and head of your household?”

Elsie nodded and bit back a retort.

“Then sign here.” The man shoved a paper across the makeshift desk. Beads of moisture dotted his upper lip.

She scrawled her name on the line. The page crinkled when she folded and shoved it into her shirt pocket, along with the copy of The Homestead Laws and Pa’s hand-drawn map.

“Get out of the way, kid.” A scraggly looking fellow jabbed into her shoulder.

Elsie stepped out of line, glaring at him. He ignored her and turned his attention to the clerk.

She elbowed through a crowd of men. How had her small town swelled to so many folks? Thankfully there were few she recognized, or, more so, who could recognize her. The less who knew her gender, the better. She certainly didn’t need no man to help her get the land she and Pa had dreamed about.

Elsie scooted her hat up and swiped at the sweat on her forehead before dropping it back into place, scrunching the thick braid she’d pinned up three days prior. Hefting her saddlebags to her opposite shoulder, she hiked the short distance to the livery and retrieved Buster. A short ride would clear her head and prepare her for what lay ahead.

Dust swirled and nearly choked Elsie as she rode in the opposite direction of the throngs, to see the old farm one last time.

Acrid smoke filled her lungs. Nearby fires, to deter Sooners from entering the strip before the race began, burned in the west, but not out of control.

Elsie urged Buster, careful not to tire him. Everything hinged on finding the land tomorrow.

Thank you for having me here today.

Thanks for stopping by, Jodie.

You can find my review of To Claim Her Heart here.

Readers, don’t forget to comment for a chance to win.