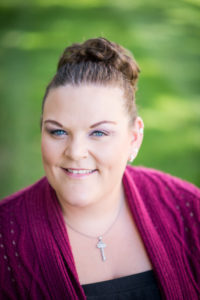 Janie Winsell is a Christian author who lives in Alabama. She writes Contemporary Women’s fiction, Romance, and Romantic Suspense. She received her Master’s Degree in Creative Writing at Full Sail University. She is a member of ACFW and active in the critique main loop. She writes about real Christians who, like the world, are not perfect, but through God’s love and discipline, they learn the lessons needed to grow in their relationship with their Heavenly Father as well as with each other.

I learned that I’m stronger than I give myself credit for. I’ve always been teased because I cry when I get angry. I’ve hated this about myself because it makes people think I’m weak. I even started to think of myself as weak because of it. Writing The Women of Strength Series, I’ve discovered that tears aren’t weakness. They help me get through tough times, and crying doesn’t make me weak. My actions while the tears roll down my cheeks determine if I’m weak or strong. I get up and start making plans instead of wallowing in my grief, and that makes me a woman of strength just like my characters.

That is so true. I’m also an angry crier. If you could tell your younger self anything, what would it be?

“Don’t give up on your writing when you go to college.” I regret not getting my minor in journalism on a weekly basis. I let someone else’s judgment over my work take my joy of writing away. I put my stories on the shelf for almost ten years before I took them down and starting creating again.

People can be so discouraging. What is the coolest, wackiest, or riskiest thing you’ve ever done?

I got a tattoo on my shoulder when I was in college. It’s a Celtic cross with two red roses wrapped around it. The roses represent my Grandma and Grandpa. They both passed away while I attended college. I love my ink, and since then, I have gotten another tattoo on my left calf. I’m not going to go overboard and get like sleeves or anything like that, but I’m proud of my body art.

I’ve considered a tattoo, but I haven’t taken the plunge. Can you give us the first page?

Gunshots rang out. Each pop and crack of the rifle ripped through Izzy Davis’ tattered heart.

Elizabeth whimpered. Her slender shoulders jerked with every shot. Six years old and without a father.

As the four soldiers moved the silken form pulling it taught, Izzy’s heart folded up into its own tight form. How could Alex have abandoned them like this?

A folded American flag and a twenty-one-gun salute were the military’s way of honoring her husband’s sacrifice.

Chin trembling, Izzy snuggled her daughter against her side, as if it might shield Elizabeth from the pain. She should stand, but her legs seemed glued to the folding chair.

Tears trickled down Izzy’s cheek and dripped off her chin as the soldier stood in front of her, presenting her the star-spangled triangle. Tight, neat, uniformed as with everything the military did.

She swiped at the weakness leaking from her eyes. Being a military wife meant she had to be strong and able to handle anything––anything but this.

Thank you so much for having me on your blog, Ginger.

It was my pleasure, Janie.

More about A Wife’s Devotion: 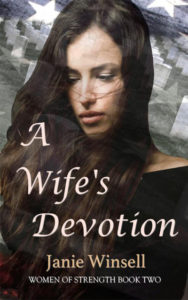 Sergeant Alex Davis wakes up from a coma with another man’s name on his medical chart.

Six years ago, an IED explosion took the lives of his platoon, his leg, and left him a vegetable­­–– or so the doctors thought.  Now fighting to regain his health and what’s left of his life, all Alex can focus on is returning to the wife and daughter he left behind. There’s only one problem.

Real Estate agent Izzy Williams has a new life. She remarried and moved her and her daughter Elizabeth across town.  But just as things are settling down, two officers show up at her door uttering one sentence that turns her world upside down.

Will Alex be able to win his family back?

With her whole world on the line, Izzy must decide if her devotion lies with her new husband or her first love.