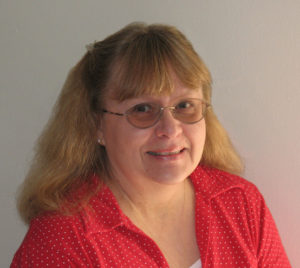 Though Alice K. Arenz is known for her cozy mysteries and romantic mystery/suspense novels, the Carol Award winning author has branched out with her newest release, The Wedding Barter, a romance that is both serious and funny.

Arenz is a member of American Christian Fiction Writers. Her first three novels were honored by two finals and one win in ACFW’s Carol Awards: cozy mysteries The Case of the Bouncing Grandma (a 2009 finalist), The Case of the Mystified M.D., (2010 winner), and mystery/suspense Mirrored Image (a 2011 finalist). These novels have been followed by An American Gothic, Portrait of Jenny, and short story, Home Cookin’.

An Interview with Alice K. Arenz

Hi, Ginger! Thanks for inviting me to join you on your blog today.

My pleasure. What kinds of books do you like to read?

My preference is mystery/suspense, which is what I usually write. That’s why I’m still a little astonished that I’ve written a romance!

Honestly, everything about this book surprised me! Let me explain.

When I was first approached about writing a romance, I was flattered, but thought it was too far out of my comfort zone. But with my publisher’s encouragement and a sudden insight into the story that became The Wedding Barter—I knew it was the right thing to do. The problem was ACTUALLY getting it written.

You see, my entire body was in such a state of spasm that I couldn’t sit at the computer—and because of chronic issues, working on a laptop in my chair is NEVER an option. Adding to the situation, were horrible allergy attacks that locked me in a mental and physical fog! After a month of trying to figure out how to honor my commitment, my husband, Chris, suggested I dictate to him as he typed on his laptop. It wasn’t an easy process by any stretch of the imagination, but within a few weeks, we got the hang of it. It took approximately seven weeks from start to finish, and instead of a novella, we ended up with a 49,000 word short novel!

Wow, I hope you’re doing better now. How do you select the names of your characters?

I pray a lot for inspiration. Sometimes God answers the prayers before I ask—giving me names before the storyline or title. The one exception is Mike Todd from The Wedding Barter—my husband’s creation as a tribute to his brother.

Funny. I knew boys with similar names(they were brothers) in high school. Can you give us the first page of The Wedding Barter?

“You have to look at this!” I passed the pages I’d printed to Natalie, indicating she should give the extra one to Hannah, who’d already begun munching on a crunchy breadstick—one of Marcello’s specialties.

“Wha’s this?” Hannah spoke around the food in her mouth. A trim finger, with hot pink nail polish, covered her lips—probably to keep crumbs from falling out.

“It’s obviously important, Han, or she wouldn’t have asked us to read it.” Nat flounced in her chair, or would have if she’d been wearing anything other than jeans. She just naturally had that attitude—all super girly girl. There was nothing pretentious about her, never had been. Just because she was always “put together,” even when covered with dirt, some people believed she was not only stuck up but stuck on herself. Quite the reverse was true; Nat was an introvert on steroids—unless she knew you well.

Hannah, neither introvert nor extrovert, perused both sides of the paper I’d given them, her dark blue eyes wide.

“Is this for real?” She finally asked, stabbing at the page with a hot pink nail.

“Come on, Riley. A bridesmaid auction? Most people I know would rather bow out and risk the loss of a friend than incur such an outrageous expense.” Nat tossed the paper on the table. “The very fact there’s such a lengthy email chain speaks loudly of a hoax. Why on earth would anyone—”

“Did they?” Hannah asked before taking another bite of the breadstick.

I raised an eyebrow in response, realized what she was asking, and shrugged. “Actually have the auction? I don’t know. There’s nothing in the chain beyond the invitation, announcement, or whatever you’d call it. It was scheduled for what—um—a couple months ago? May, wasn’t it?”

Both girls nodded. I was about to say something when our waitress came by to take our orders. Knowing Nat needed to return to work in an hour, I knew we shouldn’t waste anymore time. We all ordered Marcello’s lunch specialty, BBQ beef calzones with the flakiest crust this side of heaven, and iced teas—unsweetened, of course—then went back to our conversation.

Hannah looked through the pages again. “The auction was in May and the wedding, um, is in September. Yesterday, if it was held this year.” Shaking her head, she continued. “You don’t really care about these strangers, do you?”

“This is a joke, right?” Nat narrowed her eyes. “I mean, you’re not thinking of doing an internet search…” She choked on her sip of water. “Our very own dinosaur searching the net for anything has got to be a joke.”

We all laughed. My friends knew me well. Ever since I’d suffered a head injury that left me in a coma for three days, computers and I were barely friends. I rarely used one except for work and email. And, it wasn’t just the loss of my computer skills; all my interests and hobbies suffered because of the accident—my love of reading and my determination to one day further my photography skills. But, this wasn’t the time to think about such things.

“It got me thinking, you know?” I leaned back in my chair and studied my friends. “If someone could devise a plan like that auction, surely we can come up with some ideas to help Amy plan her wedding.” 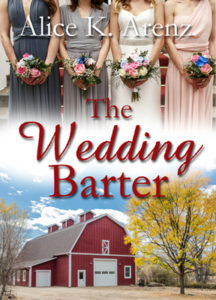 Riley Carr has been best friends with Amy Lawton since they were toddlers.  While Amy awaits her discharge from the Army, Riley’s been left in charge of helping to arrange “a very small, intimate ceremony with no fanfare” for Amy and her fiancé. But, Riley has something else in mind.

With the aid of two other friends, Riley presents her “wedding barter” idea to the groom, David Herron. He agrees, providing best man, Mike Todd, stays in the loop to keep things from getting out of hand.

It doesn’t help that the giant of a man is threatening, overbearing, and just doesn’t seem to like her or her ideas. But, when Todd gives Riley an ultimatum of producing results in three weeks or he’ll take over, she’s determined to prove him wrong. . .in more ways than one.

The Wedding Barter is available on Amazon in ebook and print format.

Alice has graciously offered an e-book to one lucky commenter. Comment by midnight on 3/28 to have your name in the randomly picked drawing.

And because I want to give you something to say… 🙂

What is the most ridiculous scheme you or your friends came up with?