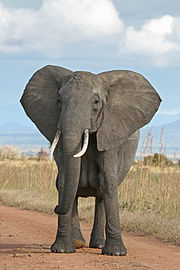 Here comes another story. I can’t help it; it’s dying to be told.  🙂
Eli the Elephant
Eli knew he was a very large elephant. Everyone told him so at least once, and, well, even his father couldn’t compare in size. Lots of his friends said he was scary and they didn’t want to play with him anymore. He didn’t mean to be scary. He couldn’t help how big he was. He kept his head lowered so he wouldn’t seem so big, but it didn’t help. Of all the elephants in his herd, only his mother spoke with him as though he were normal. He spent most days alone, though, because he didn’t want the others to think he was a baby, always hanging around with his mom.

One day his grandmother approached him and told him that he was grown enough to leave and join his father’s herd. This made Eli sad because the other bachelor elephants didn’t accept him either. He walked away, after saying goodbye to his mother, with tears in his eyes.
He didn’t know where he was going, but knew he would be alone for the rest of his life. None of the females he’d ever met would talk to him, even when he got enough nerve to say, “hi.”
Somewhere, a long way from his former herd, he found a watering hole. He stepped close and took a long drink. The longer he stood there, the quieter his surroundings became. He lifted his head and looked around. He moved his ears, listening. He didn’t see or hear anything. He ducked his head once more and took another drink. His long walk had made him very thirsty.
He lifted his head again. Something wasn’t right. He took a step back. He heard a howl. He lifted his foot, and twisted around as fast as he could. Behind him stood a lioness, licking her paw.
“I’m sorry. I didn’t know you were back there.”
She growled at him. He lowered his head and walked away. She limped to his side. “You really didn’t do it on purpose?”
“No.”
“Why aren’t you scared of me? I could kill you.”
Eli laughed at the lioness. Her eyes blazed. He stopped laughing. “I don’t think you could kill me, but even if you did, no one would care. Everyone thinks I’m too big anyway. Maybe I would be enough to feed your whole family.”

The lioness looked away. “I don’t have a family,” she whispered. “They think I’m strange because I like to attack big animals and really small animals. I won’t chase antelope or zebra. It’s no fun.”

He looked at her closely. She didn’t look hungry. “You must be doing okay by yourself.”

“Me, too. Do you want to hang out with me? I don’t have any friends either. You just have to promise not to eat me.” He giggled at his joke.
She giggled too. “Sure, my name is Ellie.”
“I’m Eli. Ellie and Eli. Funny.”
Ellie and Eli walked into the woods to take a nap and they stayed friends for the rest of their lives.
Blessings,
Ginger