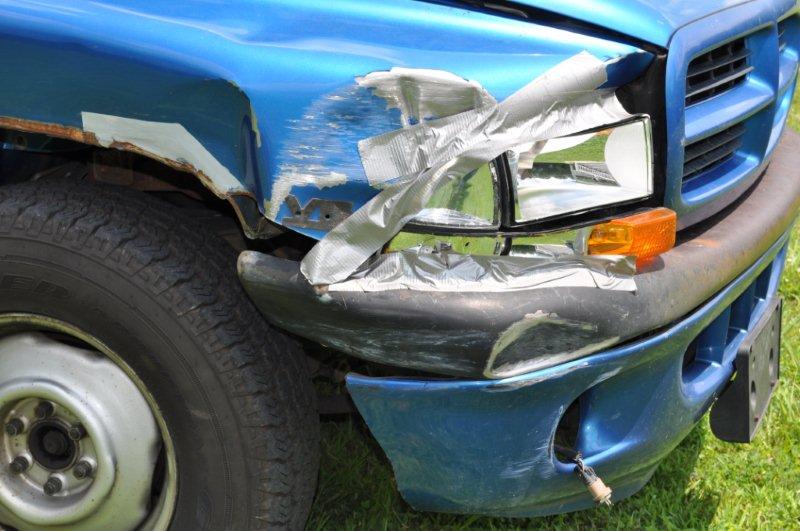 I opened this page to write a book review. But I just can’t today. Instead I’ve decided to write last week in review and count my blessings.

Saturday, July 14, 2012 – I sent my oldest son and youngest daughter off to my in-laws 8 hours away. Four and half hours or so later, I get the dreaded call. They were in an accident. My heart dropped from my chest–and though Brandilyn Collins and Tracie Peterson (no I don’t know them personally, but I have seen them in person–they’re human, ya know–and have heard them speak on this subject) would call those floating body parts, at that moment it certainly FELT like it had hit the floor.

In our part of the country, it was raining. My son hit a dip in the road (found out later, it is a known accident area when it rains), and hydroplaned. Except it wasn’t a normal hydroplane. He was in the left lane, did some sort of spin and slammed the center concrete barrier on the PASSENGER side (where my daughter was sitting). I think he kept spinning and faced forward again before stopping.

Blessings: Neither of them are hurt. The truck is worthless–it was before–but drive-able. They finished the trip safely. An abundance of grapes picked.

Sunday, July 15 – Still recovering from my heart hitting the floor the previous day. Called my in-laws to make sure my children were not having any after effects from the accident.

Blessings: My church family. My in-laws. My children had no soreness or other injuries that didn’t show up the day before.

Monday, July 16 – I get up at 6am to haul my oldest daughter and third son to our main church campus for youth camp. I wait until 8am for the parents’ meeting to begin, and then head home to have breakfast and begin my day.

I, and my two youngest sons, go to the local farm supply store for electric fence accessories because my two dogs are scared of storms and keep escaping the backyard. We also stop at a pet store to buy a hamster. Sold out. This was such a disappointment for my son, I told him we’d go to a different store the next day.

We processed a bunch of green grapes into grape juice.

My husband and I worked on the fence.

Blessings: My father-in-law took my son, and his truck, to a friend and they banged out the bumpers and fender that was bent, so it is safer to drive. My husband ordered light replacements (they were busted) and had them sent to them. The children I sent to youth camp arrived at their destination without incident-that I know about. Grapes.

Tuesday, July 17 – A typical day, sort of. My two youngest and I traipse into town to pick up a gift for a wedding, and stop by the pet store and pick a hamster. Son is ecstatic. Finally, a pet for him that he can play with (fish are no fun). Swimming lessons in the afternoon.

More parts and fixing on my son’s truck, but I’m not involved with any of it – just know about it.

Dogs find a new way to escape. Work on blocking that route, unsuccessfully.

By now, you must be wondering why I continue to write about my week if that’s all that happened…hold on, it’s not.

Blessings: The pool is open this year. It suffered in last years’ tornadoes. Everyone is safe.

Wednesday, July 18 – Hamster bites my son. We decide to return him and get a different one. Dentist appointment and shopping. As we return home from these errands, a storm thunders in the distance.

I stopped at the end of the driveway to get the mail. Unfortunately, I left my car door open. The dogs, the ones that continue to escape, decide my car is a safe place and jump in. Oh, I forgot to mention they are both 40-60 lbs., not huge, but big enough. I get them out of the car, and one of them decides that under the car must be safe. Big drops of rain are now splattering me as I struggle to get this dog out from under my car, which is still RUNNING. Finally, I get them out. I jump and slam the door and inch forward into the garage, where the dogs have now decided is a safe place. SIGH

While we are still putting away groceries, a bolt of lightning strikes our house. It sounded like someone fired a gun inside. I didn’t think much of it, really. Hugged a child who was frightened and then continued to put away groceries. UNTIL I went to my big chest freezer and realized it wasn’t working. OH NO! I called my husband and started walking around the house. At this point, I think, is when I started freaking out and my heart hits the floor (yep, I said it), again. I hand the things I was trying to put in the big freezer to a child, I don’t remember which one, and told him to find room in one of the other freezers.

When my husband got home, about 30-45 minutes later, he felt the need to check out the attic to see if we had a smoldering fire or anything up there to worry about. He found a gas leak. The lightning had traveled down our hot water heater vents and burned holes in the gas lines that fed the hot water heater. He quickly turned off the gas.

I will skip the frantic running around to figure out what got fried and what didn’t.

Blessings (bear with me, there are a lot): My house did not blow up or catch on fire. My freezer did NOT get fried (it’s full of MEAT), just the GFI it was plugged into. None of our computers were affected. Two of our three AC units are functional (it’s still 90+ degrees outside in AL). My husband is handy and fixed the two burned gas lines, so I have hot water, and the two fried GFI’s (after the storm passed), so I could plug my freezer back in. My family is safe. My husband called direct tv and ordered a service call (lost all receivers). That same brilliant husband hooks up an old router and modem, so I can have internet, since our new ones were fried.

Thursday, July 19 – I called the AC repair person and they promised to come out that afternoon. My husband decided to come home from work at lunch and converse with the man. Part ordered for AC unit, possible fix, but unsure at the time. Called Kitchenaide for my gas cook-top, I’m not real sure why it’s not working.

Finally gave up on trying to keep the dogs in the backyard and let them roam. Will work on it again, soon, because I hate roaming dogs, mine or someone else’s.

Went to the pool.

Blessings: Pool is open. 🙂 I have a working gas grill that I can cook on (since my cook-top is broken). My oven works. My family is safe.

Friday, July 20 – 7am – sent my husband and two youngest sons off to my in-laws. The trip had been planned for several weeks and he needed to pick up my daughter as my oldest son was going elsewhere to visit friends. They also had a wedding to attend.

I got several hours of “me” time, but I was so strung out from the stressful week and feeling completely selfish   about feeling sorry for myself because the people in Colorado were dealing with so much more than me, that I couldn’t enjoy it, so I made grape juice instead. The picture shows the cleaned ones. I probably threw equal that many away because I waited too long to process them.

Kitchenaide repair guy shows up. He has no idea why the cook-top isn’t working. Orders a part to see if that fixes it.

Direct TV guy shows up. He doesn’t have enough receivers in his truck and asks to come back later in the afternoon. “Sure, I’m not going anywhere.” Though I had hoped to do research, I knew it wasn’t going to happen.

11:30 am – a different Direct TV guy shows up and spends two hours replacing our receivers and trying to hook up to the internet. Receivers work. Internet, not so much. He leaves disappointed. 🙂

3:30pm – Mother-in-law calls to let me know my husband and sons arrived safely and that he’ll call me later.

In contact with third son (the one on the youth trip), figuring out an approximate time for their return.

Several more hours of quiet time. I actually have calmed down enough by this time to actually get some writing done. Yeah!

6’ish – leave for a mall close to where I will pick up my teens. Eat at Chik-fil-a. Chicken salty, yuck.

Around 8pm, I retrieve my third son and oldest daughter and their luggage from church, and head home.

Blessings: My family is safe. Our direct tv receivers work, not that I watch much TV. My house is relatively cool. I got some writing done. We now have about a gallon and a half of grape juice.

Now…if you’ve read all the way through this long post about my week, you are also a blessing to me. So I praise God for you too.