Yesterday was Mother’s Day. My mom’s been gone for almost thirteen years now, and we weren’t super close, so I really didn’t miss her much. I doubt we spent many Mother’s Days together after I moved out for good at twenty. It sounds awful, I know, but that’s my reality.

I woke up yesterday groggy and exhausted. I’d had trouble sleeping the night before, so I’d gotten up at 1:30 a.m. to take a sleeping pill. It didn’t work as well as I would have liked. Instead I woke up feeling like I’d slept for less than two hours, or been awake all night. I didn’t even remember what day it was until one of my children wished me a happy Mother’s Day.

Last night was a repeat, minus the sleeping pill. I used to need 8 hours to be functional. Since my unexplained back pain started in August 2013, I’ve survived on much less. However, after sleeping so badly for the last two nights, I’m barely functioning today. I even tried to take a nap (at 8:00 a.m.), but couldn’t relax enough to sleep. 🙁

I don’t want to even read all of what I’ve just said. It’s possibly a bunch of incoherent babbling, and for sure it’s a lot of complaining. Just goes to show that I’m not perfect. I strive daily to be sin free, since the Bible says we can be, but today is not one of those days. Reality check for you? I hope not. It’s certainly not for me.

Because my brain is…at half its marbles today, here are a few pictures of my “office.” It’s actually just a desk in a room with three other desks. One day, when a child or two decides to move out, I’ll 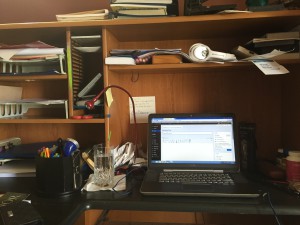 get an office of my own, but for now I manage. 🙂

This is my mess of a desk. It’s organized. HA! Well, maybe not, but I know where most stuff is. The cubbies on the left of the pic are where my children turn in their schoolwork and where I return it, in folders. The folders are new in the last few years. They used to turn in a bunch of papers and I had to sort through them to find all of one student’s work to check. Then I got smart (after 15+ years of home schooling). Each child has a folder for their work. They turn it in snuggled in their folder. I check it and return it to their “inbox” in the same folder. 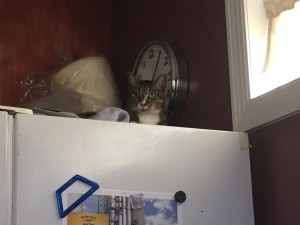 This is a pic of my supervisor. He tends to look down on me quite often. He also tends to spill my drink when he decides to descend from his lofty perch (on top of the freezer). He goes from the freezer to the window on the right of the pic, which my desk is situated beneath.

The calendar on the freezer that you can’t quite see? It’s still set on April. LOL

I’d appreciate your prayers. I may or may not post next week as I’ll be in Ridgecrest, NC at a writing conference. My family will be home fending for themselves for the time I’m there. Pray for them too. 🙂

I pray your Monday is better than mine. And that mine gets better. 😉

4 thoughts on “A Peek into My World”