I’m woefully behind on everything, including reviews. So I’ll be posting one at least once a week, I hope, for the next few weeks. Maybe I’ll even make it weekly, like I used to. But for today, you get one. 😉

To be honest, I struggled to get into this story. It was good, don’t get me wrong, but it is book two in a series (Amish of Big Sky Country), and while I liked book one, I found that “reliving” the fire that this community experienced was hard for me. And I don’t know why. About a third of the way through, I put the book down for a few days. I eventually came back to it and enjoyed reading to the end. I liked the characters, but some of the circumstances seemed forced. *sigh*

Honestly, though, it could just be me. I’ve struggled with stories lately, so … I doubt–highly doubt–the issue is with the book or the writing.

Because I acknowledge the writing is good, and the story is well-written, I am giving this four roses.

Disclaimer: I received this book from the author/publisher for the purpose of review. The above is my honest opinion.

More about A Long Bridge Home: 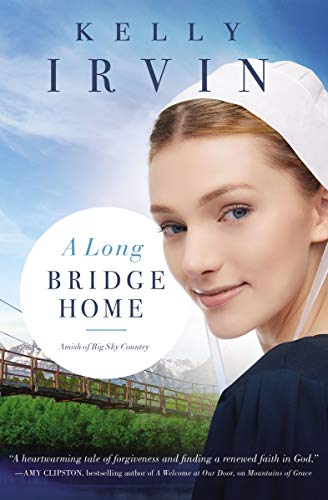 After her community in the awe-inspiring Montana mountains is suddenly consumed by a raging wildfire, one young Amish woman finds herself in a new town where she’s introduced to the Native culture of the Kootenai people.

When the Mast family is forced to evacuate their home in the West Kootenai region of Montana, Christine chooses not to move with her family to her father’s childhood home in Kansas. Instead, she wants to stay closer to home and to her beau, Andy Lambright, who has yet to ask for her hand in marriage and who seems to be holding tightly to secrets from his past.

Now, living with her aunt and uncle in St. Ignatius, Christine is on her own for the first time in her life. While working in her uncle’s store Christine meets Raymond Old Fox, whom she befriends, and he introduces her to his rich native culture with strong ties to the earth and nature. Despite the warnings of her aunt and uncle, Christine is inexplicably drawn to Raymond, and her mind is opened to a history and heritage far different from her own.

With her newly expanding horizons, Christine wonders if she can return to the domestic life that is expected of her. Her heart still longs to be with Andy, but she isn’t the same person she was before the fire, and she wonders if he can accept who she is becoming. Has too much distance grown between them? Or can they bridge the gap from past to present and find their way back together?