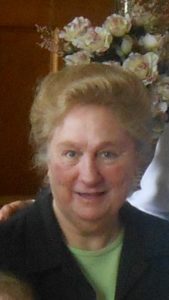 Besides being a member and active participant of many writing groups, Carole Brown enjoys mentoring beginning writers. An author of ten books, she loves to weave suspense and tough topics into her books, along with a touch of romance and whimsy, and is always on the lookout for outstanding titles and catchy ideas. She and her husband reside in SE Ohio but have ministered and counseled nationally and internationally. Together, they enjoy their grandsons, traveling, gardening, good food, the simple life, and did she mention their grandsons?

A Ghost, a Thief, and a Romance

I don’t always know my characters fully when I begin a novel, but Toby really popped into view as I wrote. Here’s a short piece of how Toby developed.

Bring in a ghost? I wasn’t sure if it would turn off readers, but the doubts disappeared when I posted a short survey asking readers what they thought.

A ghost? Seriously? Who, in this modern age and day, believes in ghosts? Rustling noises, light bumps, eerie sounds in the night, and small disturbances all pointed to the fact that a ghost was visiting Undiscovered Treasures, but was Tobias (better known as Toby) Lee Gibson having any of it? Nope! After all, it was kind of fun sneaking down the stairs in the middle of the night with only a flashlight for a weapon.

It’s always fun to develop the antagonist and the reason behind the mischief.

Man? Woman? Both? An established member of the community or a newcomer? Are they poor? Greedy? Well-liked or shunned? Once I knew who was behind the mystery, then I could move on to the reason why there was a theft—or attempted theft—in the first place. How was it put into action? That question played right into lighthearted part of Toby’s personality and imagination.

I stressed a bit over making him read a little too casual with the love side of things.

And then take his love life. Love ’em and leave ’em had always been his motto. Not that he wanted to hurt anyone, so, of course, he always made sure not to let the friendship get too far along. He just wasn”t ready to settle down—not by a long shot.

Developing an ending to a book is one of the hardest for me. Since I write mostly suspense/mystery with romance, I’m particular with how my books end. I want the reader satisfied, but mostly I have to feel what I write in my heart. I know when I’ve managed to hit the right note with each book. I feel it!

But when that same best friend and business neighbor buckles down to win his affection—and goes about it in ways that has Toby fuming—sparks fly. Whether they are romantic sparks or angry ones, you can be sure no ghost is behind this. Or is there?

When I began the fourth book in my Appleton, West Virginia Romantic Mystery series, I wanted to create Toby as a fun-loving jokester with a kind heart. He was always serious about his three loves—his shop, the community theater, and his work with the youth at church, but that doesn’t keep him from having fun. He grew up teasing his sister and his closest friends, and keeping his imaginary armor high enough to shield his heart from preying women determined to find a hole in that armor. He almost succeeds…

Here’s an excerpt from Chapter One:

Or at least he hadn’t until recently.

Slowly, he opened his eyes—but just a crack—and shifted his gaze from one side to the other as far as he could see.

Which wasn’t far, seeing as it was pitch black in his bedroom. Just the way he liked it. But if he was going to snag the current ghost in his home, he was going to have to forget about getting spooked if he did happen to see it.

He chuckled, sat up, and reached for the flashlight he’d placed on his night stand just in case the Undiscovered Treasures’ ghost decided to show up again. He and his sister, Caroline, had never been bothered with ghosts before at their antique, collectible, junk shop, so why now?

Flashing his light around the room, he saw nothing unusual. Hmmm. Did that mean it had moved on to a more exciting home?

Not if the faint, faint sounds coming from the first floor were any indications.

Three times before the ghost had deigned to visit. Rustling noises, light bumps and rustlings in the night, disturbances in the shop itself—all these and more gave definitive clues that someone—or something—was entering their business.

Toby swung his legs to the floor and stood, edging as quietly as he could in his barefeet to the door. He twisted the knob and peered through the crack, but only a dim nightlight illumined the short hallway.

Twice before he’d tried to catch the ghost, but had failed. Maybe the third time would be the charm he needed. Stepping as softly as he could, he headed to the stairs and took one step at a time, making sure to avoid the second from the bottom that squeaked as noisily as a mouse would when caught in a trap by the tail.

At the bottom, Toby drew in a deep breath. The sounds were coming from a side room where he always placed the newest items he’d found and bought so they could be evaluated, inventoried and priced before being placed in the main section of the store.

An unusually loud noise had him mentally perking his ears. What on earth was the thing doing? He’d soon find out. 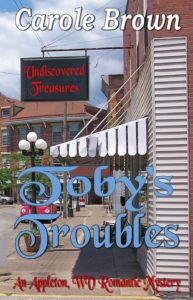 Everyone loves Toby Gibson. A co-owner of Undiscovered Treasures, a unique shop of antiques, collectibles, and junk, Toby is friendly, generous to a fault, the director of the local plays in Appleton and supports his church’s youth functions. But the minute his sister, Caroline and her new husband, take off for their honeymoon, a “ghost” begins to haunt the shop—or maybe it’s just an intruder. If so, Toby has no idea for what the thing is looking. To add to his troubles, he suspects Amy, not only is bidding for the property he’s wanted forever but is in love with him. And he’s not interested.

Amy Sanderson who owns the only flower shop in Appleton—Bloomin’ Life—is drawn into capturing Toby’s “ghost” when her own business is damaged by a destructive intruder. Having loved Toby since a teenager, she’s more than willing to join forces with him. But she has no interest in being his best friend or a sister to him. And if she has to resort to schemes of outbidding him at his frequent auction attendances to get his attention, then so be it. She can be just as stubborn as the man who’s determined to ignore her love.

In between the break-ins, destruction of property, thefts and personal competitions against each other, Amy and Toby work together to find the thief who seems so determined to find a valuable item, he’ll stop at nothing.

3 thoughts on “A Ghost, a Thief, and a Romance by Carole Brown + #Giveaway”